Of beasts and cocoons

T-Rex, the animatron
My wife and I spent the day in London today. The weather was on our side, with glorious sunshine for this time of year, and we had one of those days that just work on every front (despite Central London always being pretty exhausting to get around in the daytime). We got in some good food, with a sushi selection from Harrods, and I finally managed to take her to see Big Ben - something I'd promised to do since we moved to the UK but somehow hadn't had the time to sort out.

In the afternoon, we paid a trip to the Natural History Museum. I hadn't been since I was a child (and a good few of the exhibits don't seem to have changed since then), but it was great to visit again. One of the highlights was the dinosaur area, which brought back memories of my earliest aspirations in life. As a boy of about six or seven, I envisioned myself growing up to become a palaeontologist, travelling the world and uncovering creatures buried in the shifting sands of time.

As far as I can remember, the intention to work with the natural world carried on for some years after. Then, at fourteen I went to stay with my uncle in Germany and heard 'Rubber Soul', thus getting me hooked on The Beatles and changing my ambitions to rock 'n' roll instead of old bones. I got closer to that than I ever did with palaeontology, but it's probably an even more difficult path to make a living from. Totally unrelated to either, these days I teach to put bread on the table. I guess we all have to run with the practicalities when life becomes a reality rather than a dream.

After the bottlenecked walkways at the beginning of the museum's dinosaur zone, with its Triceratops skeletons and all manner of other beasts low-lit and suspended by cables from the ceiling, we came across the treat in the video clip above - an animatronic T-Rex. I must admit, it was very effective and slightly eerie too. The creature seemed pretty lifelike and when the imagination wandered a little, it wasn't too tough to picture him edging forward from his patch and taking a chunk out of the crowd. While there is so much to criticise in terms of government policy over the past decade, I don't think that making the museums free is one of them. 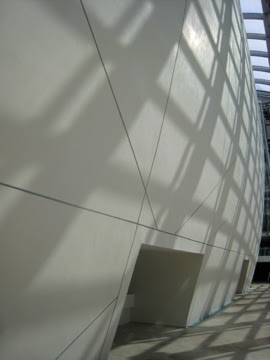 The Cocoon, which houses the Darwin Centre
In a complete contrast of lighting, we wandered past the Cocoon too, which houses the newly opened Darwin Centre. Unfortunately there wasn't enough time to head in and see what was going on inside, but there was structure, space and light to appreciate from the outside all the same. Darwin was my first childhood hero, way before I'd ever heard of John Lennon, and I'm pleased to see that he continues to play a significant role in the public imagination.

London's museums being as vast and crowded as they are, we didn't get to see much of the rest of the place. Perhaps in another 20-odd years, I'll make it back there again. There'll be a few more modern treats to reflect whatever innovations are going on at the time, but I expect there'll still be the same old shabby lions in glass cases, gathering yet more dust. Much like the rest of the country, really.

nice! always good to get out of town on a daytrip & take in some new or different sights. we spent the day in Weston-super-Mare - driving out of town felt a bit like we were on a micro-holiday. we had a great time in the sunshine, had a ride on the Weston Eye & personally it felt good to be back by the sea. we decided we should get out on daytrips a bit more often in future...

Exactly. I guess it was a case of the weather being right for once and everything else just happened to line up.

We did look at the London Eye ourselves, but it was a bit pricey and needed booking beforehand. Maybe next time. I think Brighton's due to get something like that too.

Glad you guys managed to make the most of the weekend too.