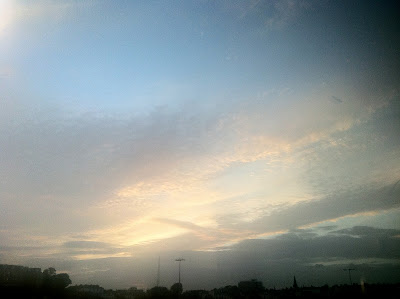 I left work last night as the sun was setting over Brighton. There were some fantastic colours in the sky. 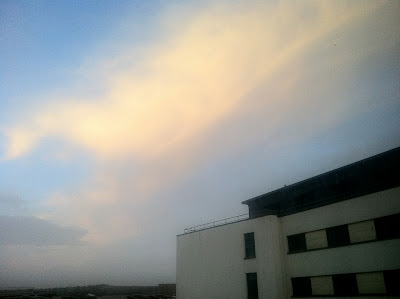 I'd spent the day locked into a screen, but the explosion of subtle variation was the treat at the end of it all. 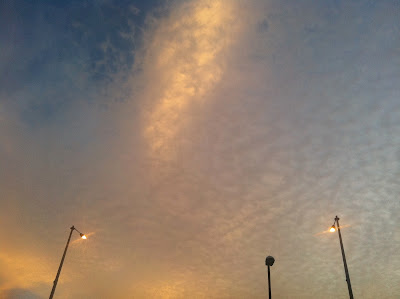 The colours and tones reminded me of watercolours, as if somebody had been sky painting. 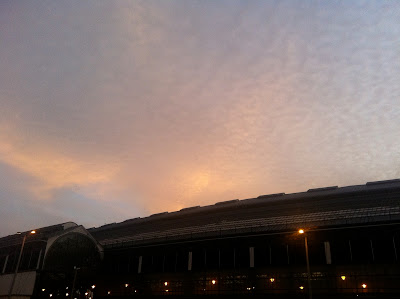 An old adage from photography is that the best camera is the one you have with you. These were all shot with my iPhone. 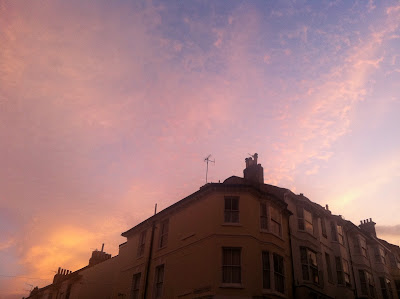 In some places, the light was more subtle... 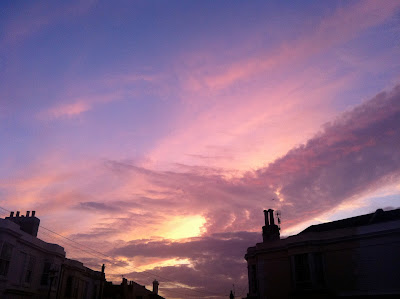 ...and in others, more dramatic.
Posted by Globalism at 8:30 am No comments:

All Things in Moderation

I've just completed Week One of a new course I'm taking in E-moderating (kind of like teaching online, but with the differences that would come from all being online rather than in a physical classroom). The course is based on Gilly Salmon's 5 Stage Model for running an online course, as depicted in the diagram on the left, which demonstates the balance needed between teaching and technical skills in E-moderation.

The timing on this course is pretty tight. I began it from a hotel room in Sydney and will complete it during the first full week of the MA I'm about to start. Despite that, it's been a very positive first week and I'm looking forward to the next one. Every week is summarised by the participants in a reflection posted in the course forum. My reflections on Week One are below.

Before I respond with my particular reflections, I'd just like to mention that Reflective Learning Journals were a major feature of the course I taught on prior to this new job. It was a one term course in core IT skills to prepare non-native speakers of English for life at a British university. Most of them seemed to find the activity to be very effective for consolidating what they had learned and for gaining a useful perspective on their own learning process. It’s good to be able to try such a feature out from the other side (so to speak).

For me, I've found that having an active and experienced moderator can make all the difference in terms of teaching the core principles of how to run an online course plus the encouragement offered to keep going. Ken has been doing a marvellous job here.

I'd come across Gilly Salmon's model before, as part of my research for a qualification I completed last year. For the assignment, I looked at blended learning and designed a course based around it. This model was a vital part of the course design, so it has been really useful to put that theory into practice by taking a course run on the same model.

Although I’ve spent a lot of my teaching life in face-to-face learning contexts with people from many different countries, it’s the first time that I’ve been in one where they are all still actually in those countries. This means that issues such as time zone differences have to be factored in to the momentum of the course, as do other participation constraints (people doing a course such as this are likely  to have pretty busy full lives too). However, it does make for a fascinating learning experience.

Major issues that arose from the first week include time and timing. To get the most out of it, it is really worth putting aside the time to give, take and interact with the other participants. Although we all have those busy lives, taking that time is likely to mean getting the most out of it. This can often be challenging, but if done means getting more out of it.

The second issue for me relates to levels of interaction. I also run my own blog and have found that there is always much more activity there when I engage with other people elsewhere on the Web (particularly on their own sites) than when I simply put something of my own out there. The same applies to this course – while it is necessary to post my own messages in the forum, my participation comes alive more when I interact with other people. This can be harder and take more time, but is ultimately more fruitful than just using the forum as a ‘broadcast mechanism’.

I plan to apply the insights gained above by continuing to pay close attention to the moderator’s techniques (including when he takes off the stabilisers to step back from the coaxing), look forward to what I can learn from the Week Two sections on managing timing, and try to continue both posting and interacting with others on their postings.

(PS Managed to get the writing down a point on the Fog Index, but still on 13.45 – gonna have to work on getting that one down!)

Posted by Globalism at 6:34 pm No comments: