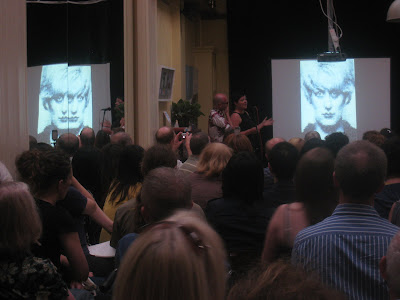 Dr Dan Pinchbeck and Jessica Curry, 'Computer games as experimental art?'
I went along to the second Brighton Pecha Kucha Night tonight. I'd been wanting to go along to one of these events for a while as I'd come across the name in Tokyo, discovered that it had become a bit of a worldwide thing (happening now in 210 cities around the world) and I'm always interested in a Brighton contribution to a global event.

There was also a bit of a personal connection too. The format, where a series of presenters speak in front of a live audience showing 20 images for 20 seconds apiece, was first devised in 2003 by Japan-based designers Astrid Klein and Mark Dytham to show their work and attract people to their exhibition space, Super-Deluxe. This experimental art space/nightclub is in Tokyo's Roppongi area, a part of the city that is simultaneously sleazy and high class, and is one of the few parts of Tokyo where Japanese and non-Japanese mix and mingle with each other quite freely.

The first Pecha Kucha Night was held in 2003, the year that I arrived in Tokyo. Three years later, I held my own event at Super-Deluxe, a launch party for the 'Peace Not War Japan' CD co-organised with the record label. I also got to perform that same evening, DJing as Control K and singing 'Imagine' with some of the members of Shelf Life. It was probably around then that I began to pick up the name Pecha Kucha, which roughly translates from the Japanese as 'chit-chat'.

It was a muggy evening in Brighton tonight, though nowhere near the oppressive humidity of a Tokyo summer, and the event was being held at Redroaster - an airless coffee house at the beginning of Kemptown. Already packed with punters by the time we arrived, there was no choice but to stand at the back and strain a little to hear the speakers, who were mostly all a little underconfident with microphone technique. 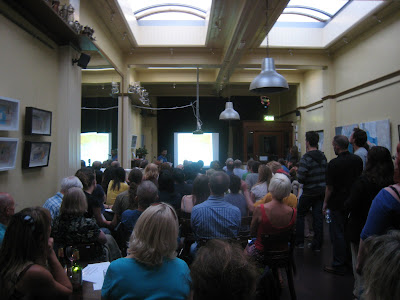 Nirmal Dhiman, 'Visual diary drawings'
Most of the presenters were artists of some sort but although some of the talks were quite interesting or engaging, we left during the interval. I was satisfied that I'd got enough of a flavour of the event, dug the format and was in the company of a wife who was feeling the stuffiness of the room so was happy not to stick around.

It's definitely a good format for spoken word events or presentations, as it cuts out any chance of waffle and gives presenters a standard that they all have to keep to, whoever they might be. The programming of speakers is a very important element of these events too. Tonight felt a little too much like a series of art college end-of-term presentations for my liking, though that was both appropriate for Brighton and seemed to go down well with the audience.

I do however applaud each of them for going up and giving it a go, particularly as I suppose that visual artists don't tend to spend much time speaking in front of live audiences. And I'll certainly keep an eye out for future ones - you never know how these things could develop.

Now, TED talks in Brighton...that would really be something I'd stick around till the end for.

Bit by bit, slowly but surely, I'm about to start moving with more online activity after the recent hiatus. Following at least a month away from being permanently online, I'm now connected again.

Although it feels good to be back and I'm looking forward to reconnecting with some of the things I've been missing out on, being offline has also been positive in other ways. I've noticed the birds singing more, I've got a little sunburnt and have been having more face-to-face-conversations with actual people rather than through an internet-enabled device.

I think that it'll have to be a bit more selective and productive this time around, with less time spent just jumping from place to place. Easier said than done once temptation is laid out, but I'll give it a go.

Before I begin getting busy again with what's up in Brighton and the shape of my new life, here's a video I recently came across with some beautiful time-lapse photography of Tokyo. Can't beat those sunsets and cityscapes in my book. Thanks to Jamaipanese for pointing the way and to Samuel Cockedey for putting in the graft.

Posted by Globalism at 9:37 pm No comments: