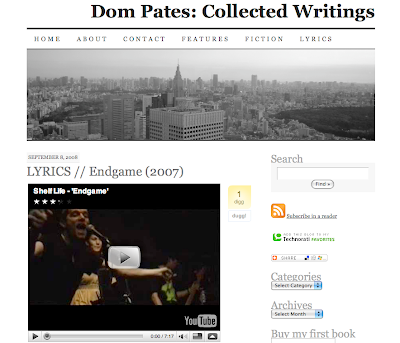 'Postings From An Edge' began with a first post back in May 2006, making it now on the verge of its third birthday. Were I able to put more of my focus into it, I'd probably mark that particular anniversary (perhaps with a masthead or something). As it is, energies are still largely directed elsewhere so it'll probably pass quietly and make far less noise about the fact than the average three year old. However, this post is not about how irregularly I update this particular blog.

Six months after I began it, I started a second blog as a place to collect all my publishable writings together. I began it on Blogger, using the same service as this one uses, and started sifting through my archives of published and unpublished works for pieces that were up to a decent enough standard to push in front of an audience. Of course, as it was on the internet anyway, it's been effectively live and linked to for some time and has even had a little action around it (always good to get relevant comments).

The intention was to fiddle around with the HTML and figure out how to make it more easy to order and navigate once all the content was uploaded. Given that it was being done at a pace considerably slower than that at which the internet tends to operate, by the time it was almost ready I'd discovered that it would actually be much better to use Wordpress and build it up in there rather than hacking around with code.

With all posts up, I imported the whole thing into Wordpress and then had to go through more cosmetic doctoring to clear up the import. Most posts look as originally intended, but there was a weird function of the import where many of the inverted commas ended up the wrong way round. For now, that's how I'll leave it. The original Blogger site will remain online but will not be updated with any new content.

After all this time and with plenty of tweaking over the years, the site is now fully up and running and ready to meet its audience. Dom Pates: Collected Writings is an archive of written works that includes magazine articles, interviews, reviews, travel pieces, short stories, song lyrics and more. The earliest pieces date from 1991, when I served as Music Editor on a Cardiff college magazine that I helped found along with fellow students. The most recent material comes from 2007, and covers lyrics for the Shelf Life album 'Best Before End', plus various pieces I wrote for publications in Tokyo.

Hopefully, it should be easy enough to find your way around the site. Pages are ordered by Features, Fiction and Lyrics with a drop-down menu on the right side to go to a particular category. There are also a number of other features, allowing you to share any content you like, subscribe to the RSS feed to stay up to date with new activity on the site, or to find me elsewhere on the web.

For any readers new to the service, each post can be voted on using Digg.com. You'll probably need to register an account with Digg, but once you have, you can click on the yellow button on the top right of the post to add your vote and help get the content a little more noticed. If you like (or loathe) what you read, do please leave a comment on the post itself - the more comments from readers, the more I'll be encouraged to write!

The amount I write does tend to depend on where I'm at, both creatively and personally. As I produce more material in the future (eg columns or magazine pieces, more short stories or lyrics for a second Shelf Life album), it'll find its way onto the site.

In the meantime, dip in, take a look around, give it some feedback and please help spread the word. If you'd like to exchange links for a similar or relevant site, there's a Contact page too for getting in touch.

Posted by Globalism at 8:55 pm No comments:

Sakura in Tokyo from James T. Kirk on Vimeo.
As Britain starts wobbling through its spring months, unable to decide whether to be a little bit warmer or to keep up the chill, I came across this delightful video reminding me of the joys of springtime in Tokyo. For just a few short weeks of the year, the usual greyness of the cityscape is blanketed in a sweet, fluttering pink as the cherry blossoms ('sakura') come out in bloom.

'Hanami', which literally translates as 'cherry blossom viewing party', is one of the few times of year which the whole city allows itself to let the hair down a little. Visiting during this season is a rare opportunity to see Japan at play.

I felt that this video was very nicely done, so decided to put it up here (and not miss out on the season entirely myself, even if I might be a little bit late). It came via Alexandre Gervais. Thanks for pointing it out, Alex-san!

Although I've had a lot else on recently, I've grabbed the occasional moment to put the above short film - 'Falling' - together. The footage was shot in Scarborough during the week in February '09 when snow brought much of Britain to a standstill (this country doesn't really 'do' snow very well).

I've gone for simplicity as much as possible, from the black and white of the images to a pared down number for the soundtrack, credited to Control K. Unfortunately, as I wanted to get it out before spring got under way too much and winter was completely forgotten about, I've let the music out rather too low in the mix. If you like the sound of the tune, turn your speakers up to get a better effect!

Short stories, short films...it gets harder and harder to get teeth stuck into a serious piece of work in these frenetic digital days!

Original piece hosted at Globalism Films.
Posted by Globalism at 12:39 am No comments: