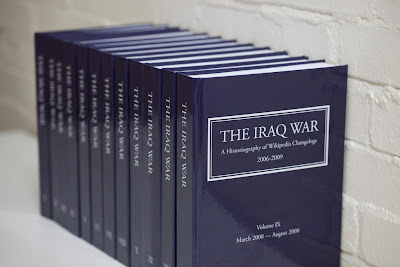 'The Iraq War: Wikipedia Historiography' by STML (CC licence: BY-NC-SA)
This set of books, a 12-volume collection of some 7,000 pages, was recently created by publisher/author James Bridle. An artefact for our times, it contains every edit and version of a single Wikipedia article (12,000 in total) - the one on the Iraq War - between December 2004 and November 2009.

Rather than a more straightforward history, the collection is described as a 'historiography', being what you get when you study not 'the events of the past directly, but the changing interpretations of those events in the works of individual historians' (Furay & Salevouris, 1988).

Bridle himself describes history as a process rather than a set of facts, a point of view that I would certainly concur with. He goes on to describe Wikipedia thus:

(It) is a useful subset of the entire internet, and as such a subset of all human culture. It’s not only a resource for collating all human knowledge, but a framework for understanding how that knowledge came to be and to be understood; what was allowed to stand and what was not; what we agree on, and what we cannot.

It is certainly a fascinating way to visually represent both changes in our contemporary global culture and a divisive issue that has been probably the biggest international point of contention of the last ten years (as evidenced by the range of opinions contained within the volumes). Publishing books of wiki edits might be an old style way of representing the new, but I think it works well and certainly makes a strong point.

Furay, Salevouris (1988); The Methods and Skills of History: a Practical Guide; Harlan Davidson

Posted by Globalism at 7:10 am No comments:

Some great pictures were taken at the Shelf Life show earlier this month by Björn Neumann, a regular at Rubber Soul as well as a very talented photographer.

Either click on the above slideshow or here to view the full set. Video footage to come later on this year.
Posted by Globalism at 10:35 pm No comments: 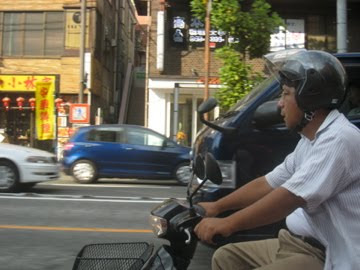 Yokohama scooter boy
My wife and I returned to the UK last Sunday from our trip to Japan - our first time back there in about two and a half years. I was thrilled to be back in the country again and the break from England was much needed. I was also very happy to be in temperatures 15-20 degrees higher than the ones we'd left behind in Britain as it meant getting some semblance of a summer, although she was rather less keen on the heat. The humidity is pretty stifling at the best of times.

The main reason for going back was to finally hold a Japanese leg of our wedding celebrations, with a small gathering in Yokohama for the friends and family members from her side that naturally weren't able to make it over for the English leg back in 2008. An attempt at rebalancing the more Anglo-centric first version, this meant that she covered the organisation of this one and I went along with whatever the plans were. A lot of the time, I was a back-seat passenger staring out at the back streets of Yokohama as we moved from store to store and place to place, stocking up on necessary goodies and making arrangements. 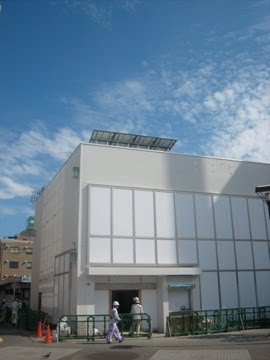 Near Tokaichiba station
Although I took quite a lot of photos, I wasn't that happy with most of them. I guess many of them were a little dashed off or ill thought out, but there were the odd few gems that turned up on the memory card at the end of the trip. I also took plenty of video footage, having invested in a new Flip UltraHD video camera prior to departure. This footage was much more satisfactory, which was an interesting development in documentation of a visit. However, as the next few months are fairly solidly packed with work-related commitments, there's going to have to be a gradual drip-feed out of this year's Japan content rather than a gushing out. 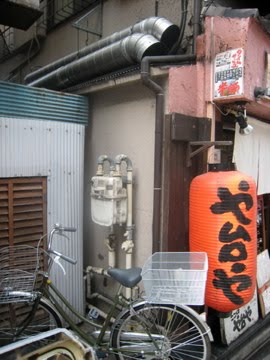 Back streets of Kokubunji
I had a little bit of time to myself too, and took full advantage of an opportunity to both squeeze in a gig with the band - our first in two years - and catch up with a few old friends. It was funny to be back on the trainlines of Tokyo, heading from suburbs to city centre on journeys both intensely familiar and now with the veneer of being slightly alien again. Interestingly, to my eyes Tokyo hadn't changed a great deal since I'd left, which for a place that is seemingly built on constant reinvention suggested that it was finally settling down. Letting Shanghai or Dubai claim global attention for futurism junkies, Tokyo's actually chilling out a little. 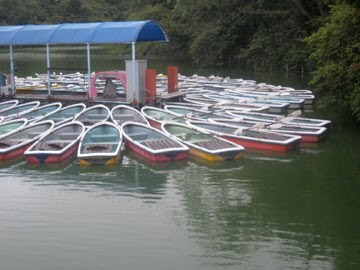 Boat fan, Inokashira Park
One friend had decided to move back to Tokyo again having left and returned to the US several years ago. It's funny how the place gets into your veins. Although I was a lot more unhooked from the internet whilst there, I did post the occasional Facebook update (just keeping things within smaller circles). My comments about being back often triggered exclamations of nostalgia or envy from connections that had spent time there themselves. Similar ones to the comments I tend to make when the same people go back themselves. Most of the other folks I caught up with whilst in town (largely all non-Japanese) seemed perfectly content to carry on letting the flow of the city keep moving them along. 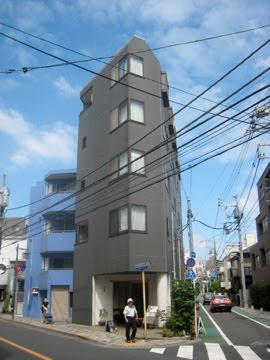 Mitaka junction
Because there was a fair amount of time moving around and only being static for brief periods of time, I looked at the bigger things that I could capture whilst passing through. This meant taking in more of the architecture clustered around back streets or near train stations, occasionally grabbing a decent enough picture of a moment passing. Tokyo's not only long been a great testing ground for global architects looking to try out an idea they could not likely get away with elsewhere, but also fascinating for the mixture of buildings that sit next to each other and the way that space is used. 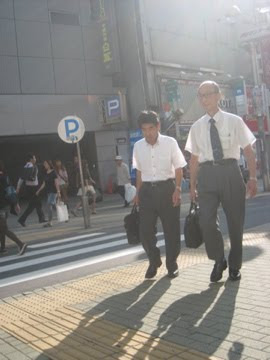 Shadowing Shibuya salarymen
I didn't get to spend as much time in the centre of Tokyo as I did in the suburbs of Yokohama, but grabbed the odd moments when available. I had a couple of separate meetings with people in Shibuya, the place that's always given Tokyo its futuristic feel and where foreign camera crews often head for their iconic footage of the city. Bewildering as it can be to the first-timer, the chaos of the crowds can be a balm for the seasoned Tokyophile. 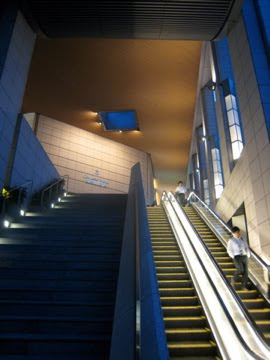 Cerulean Tower escalators, Shibuya
Now that I'm back at work, I've got a stack of stuff to do, including finishing off the DELTA course that I started a year ago and getting to grips with a new area of teaching - GCSE ICT. This will mean simultaneously being a student of a Cambridge qualification and a teacher of one, which is a rather unusual position to be in! It'll also mean that I'll inevitably struggle to get in as much blogging and other stuff as I'd like. Still, all in a good cause.

Hold on and there'll be films from Japan, possibly more pictures and a bunch more Shelf Life content too. Got to squeeze this stuff in while I can! 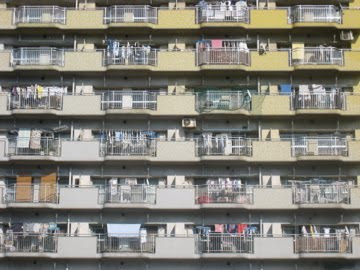 Kanagawa balconies, with laundry
Posted by Globalism at 10:34 pm 2 comments: