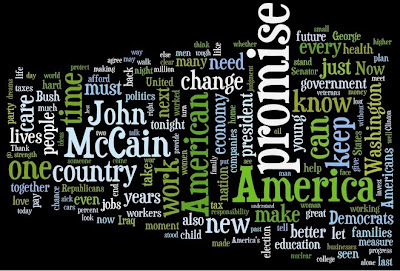 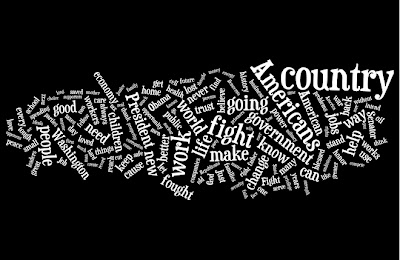 John McCain's acceptance speech, in a 'Wordle cloud'
Nine months since the last 'Web Nuggets' post - this is a blog that's been rather off the boil recently! Just to show that it's not been completely neglected, here's another little nugget from the Web today.

I discovered Wordle a couple of months ago, a fun tool created by a former IBM engineer. Paste text into a box and it generates word clouds, like the above examples taken from the acceptance speeches of the two American presidential candidates. It has rather a nice way of demonstrating the key themes of a text, whilst also being rather attractive graphically.

Other example convention speeches can be found at the original Wired.com post.

Posted by Globalism at 9:18 pm No comments: