A couple of years ago, I went to an international teachers conference in Brighton and attended quite a few sessions on blogging. 'Blogs are like sharks,' announced a Turkish presenter in one of these sessions, 'they have to keep moving, otherwise they die.' As a rule of thumb for the social Internet, it was a hard one to disagree with, and can be just as applicable in considering social media profiles, forums, or anywhere else online that requires a virtual gathering of people in a particular space. Berners-Lee's marked up world wide web might have enabled a Library of Alexandria for all to be built and filled with crowd-sourced content, but until the people started using that library and then later discovered that the space could be used for an awful lot more than just reading information, that library would have served limited function.

When the blog as a medium was younger and more novel than it is today, I eagerly embraced the opportunities that it presented and, like many others, enthusiastically set about blogging. 'Postings From An Edge' was started in May 2006 in a suburban Tokyo apartment and is therefore coming up to its seventh birthday. In that time, I've seen blogging become a fairly mainstream part of the online experience as well as witnessing a waning in energies expended on the form, plenty of worthy blogs come and go, and certain writers I admired (such as Lawrence Lessig or Clay Shirky) either retiring their blogging or limiting their output to very intermittent.

Throughout this time, I've tried hard to maintain my own blog and keep it alive - whether through adding features that encouraged interaction and made it easier for communities to gather, or simply making sure that I posted some form of content at least once a month (if not more often). I'd kept a private paper diary on and off from the age of 14, so the discipline of blogging wasn't too much of a jump. The nature of the content changed though, as I tempered what I wrote about in the knowledge that there was a possible audience out there (however limited my readership might be) and the form itself allowed for featuring forms of media not possible in a traditional paper diary. The ability to complement thoughts and observations with audio or even video and then have an actual readership on top was a new paradigm of personal expression at the time. This was of course before the brevity of the tweet and its imitators (Facebook status updates anyone?) became such common currency in networked public discourse.

I recently completed a project that involved repurposing my Great Uncle's handed-down World War Two diaries and publishing them in audio form to a web server, all accessible through a Flash-based interface. As I was narrating the audio files as well as constructing the framework, I felt like I got to know him pretty well - better than I ever had done when I was a child that was sent WH Smith tokens every birthday and Christmas from this obscure old man living somewhere in London (the biggest inhabited place I could then imagine). By immersing myself in his world as captured through his diaries, I also got to know a side of the man that had remained hidden from his relatives whilst still alive - a perhaps darker and more troubled, but certainly more complex man than the one portrayed in his relatives' memories of him. Admittedly, he was writing as Europe was tearing itself apart and London was enduring The Blitz, but these texts nevertheless brought home the common use of paper diaries (for some people anyway) as a place for the psyche's depths and darkest moments to go, as well as a repository for the mundanities of everyday life.

My own paper diary covered the odd few dark moments over the years, as well as more intimate thoughts that were deemed worth preserving, but not publishing until after death. My own blog, by contrast, mostly contained snapshotted moments from my travels around Japan and elsewhere, communications about projects that I was involved in, or nuggets of interest from around the Web, captured and shared on my own little corner of it. While the blog was in many ways a continuation of my writing just in a different medium, it was also quite a different form with a more distinct awareness of audience.

As the Masters degree that I've been taking reaches its apex along with other changes in family life, 2013 is going to turn out to be another one of those paradigmatic shift years where priorities get reassessed and things get shuffled around. Preamble over, I am hereby announcing a hiatus for this blog - possibly until September, but likely until the end of the year. The paper diary seems to have gone into a state of suspension several years ago already, and it's hard to say whether that one will indeed get revived. It is now also time to press pause on the blog to allow me to get through this year and its multiple competing demands with fewer of the other commitments that I've been trying to sustain going on at the same time.

I will still have some level of online publishing activity going on this year, in the form of tweets and Thursday Night Show cloudcasts, but need a little time out from everything else for a while.

Looking forward to the return already and many thanks to those that have taken part in 'Posting From An Edge' over the past seven years and contributed to the slight sense of community around here.
Posted by Globalism at 3:07 pm 2 comments:

This video is starting to go big on YouTube. Nothing else seemingly available from the uploader. Not findably available for download, despite the CC0 public domain declaration. But not only a great set of animated infographics, but also a powerful message that is clearly illustrates the power of real data (disclaimer: I haven't verified the original source sited, but they are sited all the same for those that want to verify it).
Posted by Globalism at 9:10 pm No comments:

My name, mapped in airport codes 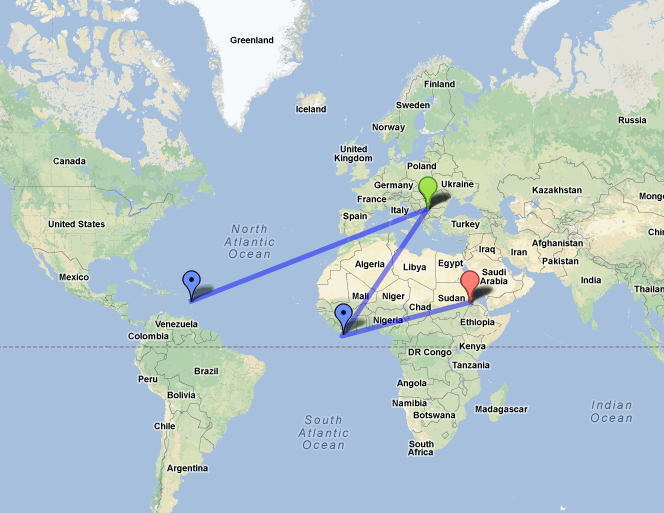 Looks like that would make for quite a journey!

Posted by Globalism at 12:15 am No comments: 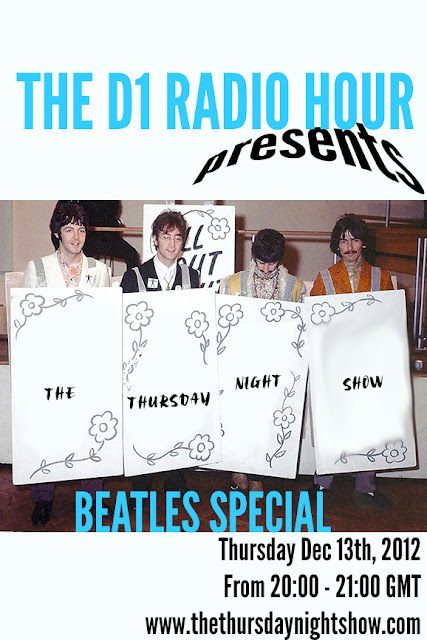 Excuse the shabby, rushed Photoshopping (on George's board, at least)! Tune in tonight for a Beatles special on The D1 Radio Hour at The Thursday Night Show, followed straight after by a live telecast from the Chap-Hop Christmas Ball! 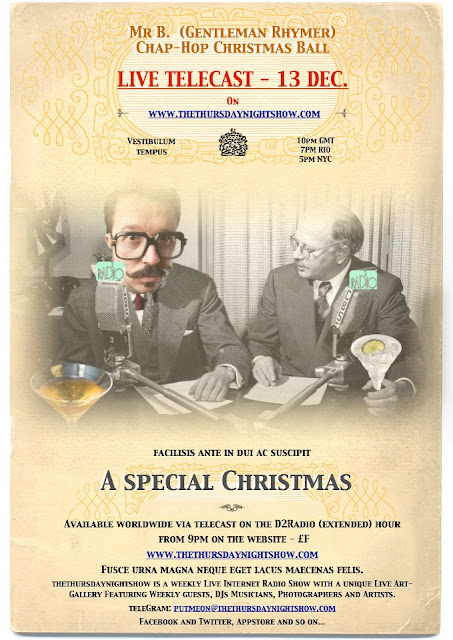 Posted by Globalism at 8:23 am No comments: