Archive clip: Shelf Life - 'With Or Without You'

Getting back on track with the trawl through the archives for publishable content, I finally managed to get this one up over the weekend - Shelf Life's cover of 'With Or Without You'. The clip comes from 2005, and it's quite hard to believe that that's now five years ago. As it was shot with a small camera from the audience, the quality of the video is a little shaky.

We often used to end a show with this track. It was always a fun one to end on as the audience got into the ballad at the beginning, then it really sped up towards the end. Despite not being a major fan of U2 by any shot, I did always like this particular song and it was great fun to play.

I'm also pleased to say that when I return to Tokyo at the end of the summer, Shelf Life will once again be playing together at Rubber Soul (Sunday September 5th). Tokyoites - if you're in town that night, come on down. You heard it here first folks!

Oh, and I hope that regular readers like the new design for this blog. Still much more to do on it, but the look seems much more in keeping with the Web of now than the one of four years ago, when this blog began.

Posted by Globalism at 11:54 pm No comments:

Musings on the World Cup 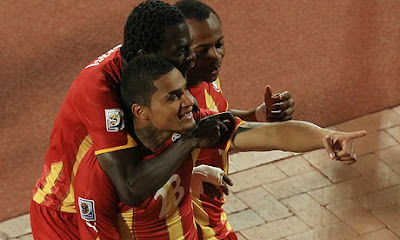 Kevin-Prince Boateng celebrates scoring Ghana's first goal.
Photograph: Martin Rose/Getty Images
It's been good to finally be in roughly the right time zone for the World Cup this time around. During the Germany 2006 tournament, I was still in Japan and the one before that the tournament itself was being held in East Asia while I was still in Europe. This has meant that the games have been held during my waking hours and it's been much easier to catch more of them.

I watched the USA vs Ghana game tonight and came away pleased with the result. Although I'm happy to see the Americans starting to do well in football as this further internationalises the game, I was definitely rooting for Ghana. Being the only African team left in the tournament, they now represent the hopes of a continent. As someone that grew up with a image of Africa that was framed by Western media as something like the 'basket case' of the world (famine, drought, disease, corruption, etc), it's fantastic to now see more positive perceptions of the continent being put forward. I've only spent time in Tanzania, but was amazed to see what an impact football had on the place, so I think it's right that an African team should finally be going forward (although I believe that Senegal and one other nation have previously progressed as far as the Quarter Finals before).

I've never been the world's greatest sports fan, but at times like this - when significant proportions of the world's eyes are tuned in to the action - I make an exception. That probably makes it a little easier for my wife, in that she only has to put up with me going on about the games every four years (possibly two if we count the European Championships too!). Equally, I don't tend to align myself that closely with 'my nation' that often either, being more or an internationalist at heart than a nationalist. However, the World Cup's also one of those moments that I join in the national conversation and keep a keen eye on England's fortunes.

Once again, they've made it through the first stage and one match stands between them and a place in the Quarter Finals - against apparent 'historic rivals'. Tomorrow - England vs Germany, it's going to be an interesting afternoon! By all accounts, we're set for a heatwave too, here in England...

With the major parts of my course now over and the term coming to an end, there's a fairly major backlog of Web stuff clamouring to be heard. I've now got a little more space to begin tackling it.

First up, this little nugget and one that I couldn't resist. It hits many of the right buttons - Japan, tech, etc. Yes, a Japanese couple - in what I believe to be a world's first - have been officially married by a robot. The BBC have also reported on this story, which is a few weeks old (ancient news on Web terms) by now.

Happy birthday 'Postings From An Edge'!

This blog is now four years old. There's much planned before it reaches its fifth birthday, including a redesign of the template, reworking of the additional pages and a greater attempt at SEO-ing it and interacting more with my readership (or trying to encourage it anyway).

I'd write more than just a couple of short paragraphs and reflect on things a little better, but I have an exam coming up in a couple of days. This doesn't leave me with an awful lot of extra headspace.

Fingers crossed I pass first time and can move on with the rest of my life! Until then, watch this space...
Posted by Globalism at 12:15 am 1 comment: