As those readers who know me will probably already be aware, 2006 has been a very full and hectic year in many ways. It was therefore with great joy that I grabbed a couple of weeks off this month for my summer holiday. No going abroad this time, but I received my first family visit here in Japan. Along with the missus, we all managed to get some quality time in, relaxing, sightseeing and hanging out within and around Tokyo.
After a while, even when you live in a completely different place to the one you started in and no matter how exotic or different it may be, you get used to it and it becomes your regular routine life again. With this in mind, it was great to be able to look at Tokyo as a visitor or outsider again, as opposed to being just another runner in the wheel.

Below are some images and comment about a few of the highlights of two weeks off in Tokyo... 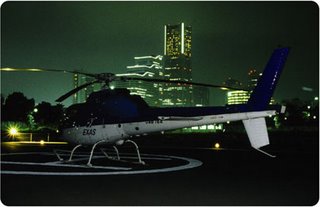 A few days into the break, I got to tick one of those 'must do before I die' experiences off the list along with throwing a big surprise on the folks. For between roughly $60-80 each and running in at a mere 15 minutes that could have gone on for much, much longer, we all took a sunset Helicruise over Tokyo.

It was quite an incredible sensation, floating in a bubble over a vast sprawl of cityscape as the night lights began bursting into show. I felt lightheaded without being dizzy and entranced by the perspective that it afforded over the city I currently call my home. All the way back, everybody seemed to share the same sensation of feeling somewhat elevated.

The tour operator doesn't permit photos during the flight however, so I've illustrated it with a picture from their website. The image depicts the heliport at Yokohama, where they also operate tours. 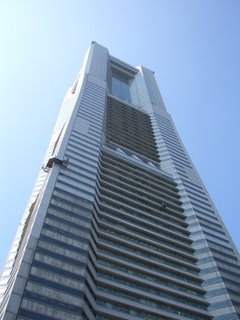 Speaking of Yokohama, above and below are a couple more images from Japan's second biggest city, the first day trip we took together.

I love Yokohama. The streets seem to be much wider than in Tokyo and somehow, whenever I go there, there's always beautiful weather and the bluest of skies. This time was no exception.

The Landmark Tower is a great place to take guests and visitors to Japan. At 70 stories high, it is Japan's tallest building and offers incredible views of Yokohama and Tokyo from the 69th floor Sky Garden. Above is a view from the ground, below is a view from the top, including the shadow that this beast casts over the bay. While it has now been surpassed by the one in the world's current tallest building, the 1667-ft, 101-story Taipei 101 in Taiwan, Landmark Tower once boasted the world's fastest elevator, which takes 40 seconds to get to the top. 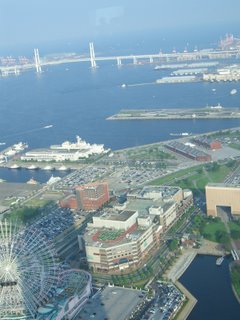 A substantial focus over the last couple of weeks was on visiting as many Japanese gardens as possible, both for my mother's gardening research and a great opportunity for us to get some green air into our lungs and me to let the weight roll off my shoulders.

It does put a very different spin on the carpet of concrete that Tokyo can be if you let it. There are many parks and gardens all over the city, some big and bold, others squirrelled away on a back street somewhere.

We visited 4 in total: Shinjuku Gyoen, Tonogayato Teien, Showa Kinen Koen and Rikugi-en. The picture below is of a part of the Japanese Garden that is featured in Shinjuku Gyoen. It also has English and French style gardens too, and being in the heart of the city, makes for a very pleasant escape amidst the skyscrapers. 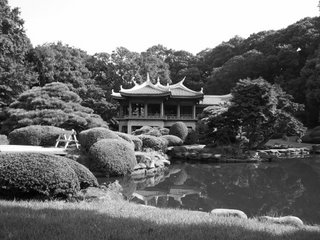 Below is a tunnel constructed from strips of bamboo at Tonogayato Teien, in my neighbourhood of Kokubunji. Japanese gardens make very good use of bamboo for all manner of features and structures. 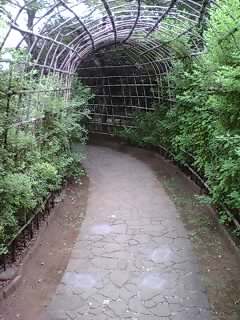 Halfway through the fortnight, the Peace Not War Japan/Dynastic Records CD release party was held at Super-Deluxe in Roppongi.

A watershed moment of sorts for PNWJ, it turned out to be a most enjoyable event at a great venue, and included acts featured on the CD, belly dancing, a peace fair with local NGOs and a very talented VJ for the visuals. I made my live DJ debut as Control K, there were also DJ sets from Bhang Lassi and Young Jeff of Quante Jubila. Live acts were Cheryo & The Berovolas (depicted below, with whom I also sang 'Imagine') and KP, who were one of the highlights of the event for most people.

With a reasonable turnout too, all who attended gave me very positive feedback about it, which was almost a relief! Hopefully, it'll turn out to have been the first of a number of great music events for peace in Japan... 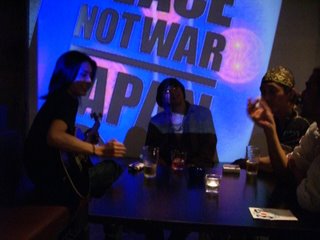 After finally getting some much needed sleep, with the launch party out of the way, it began to rain. This pretty much put paid the intended week's worth of hiking and required a set of 'rainy day in the city' activities. Fortunately, Tokyo's very well equipped in this department and has a wide range of fascinating museums to discover.

The highlight for me was the National Science Museum, that includes probably the most incredible array of fossil specimens of dinosaurs and other long-extinct beasts I've ever seen. The Tokyo National Museum is well worth a visit too, for learning all about Japanese art and archeology and which also includes a range of other Asian relics and treasures.

By Friday, the rains had cleared sufficiently for a trek out to the nearest peak, Mount Takao. 599m above sea level, it's one of the closest natural recreation areas to Central Tokyo and has a temple near the top.

Shortly after beginning work on PNWJ, I picked up a partner to help on the project. While he was a great guy and very keen on what we were doing, I had the feeling that we'd not complete the aim of releasing a CD together.

One day, we planned a trip to climb Takao. He arrived at the train station late, having been at a meeting in Shinjuku in the afternoon, and I looked at the climb as a metaphor for whether or not we'd be able to meet our aims together. Needless to say, it got too dark to continue before we reached the peak and we had to abandon the climb. I took this to be a sign.

He's back in England now, having been round the world on Peace Boat since. I stayed here in Tokyo and carried on with the peace project. Now, the CD is finally released and I climbed the mountain too.

The picture below is a forest reflection in a pool that gathered between some of the tree roots which line the paths up the mountain. 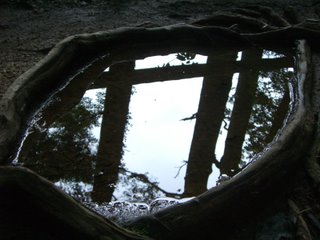 The parental visit and my summer holiday ended with a weekend visit to the region that includes Japan's most recognisable icon, Mount Fuji, and the Japanese Lake District that surrounds it. It was my first time on Fuji, having only experienced it from a distance. We only drove up to the 5th station instead of actually climbing the thing, but still managed to get some pretty remarkable views from there. The picture below shows some of the mists that were shrouding the peak on our visit. 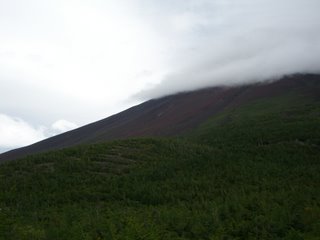 Another view from the 5th station (shown below) depicts the ocean of cloud that spread between Fuji and other neighbouring peaks. Definitely a most mystical sight. 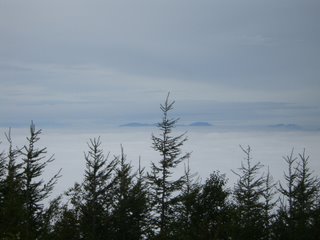 On the shores of Kawaguchiko (Lake Kawaguchi), we happened to come across the curious little museum named ArtGaia, that had a very modern Japanese set of exhibits going on, including a live 'graffiti' artist drawing fascinating cartoons on the walls and a major themed exhibition that seemed to be about the dog that belonged to a socialist Czech playwright from the 1920's... 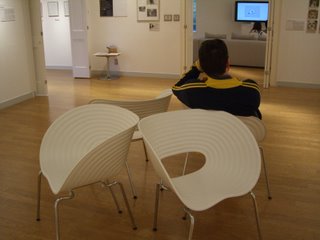 ...above is a back shot of me watching a film about the dog, and below is a shot of Tomomi from above, possibly watching the same animation. 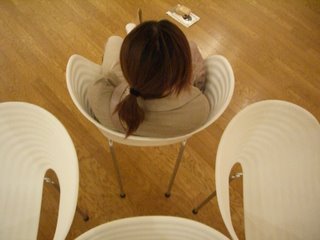 These interesting little creatures seemed to be all over the museum too, hiding in corners or loitering in window sills - headless wire and wool sheep. 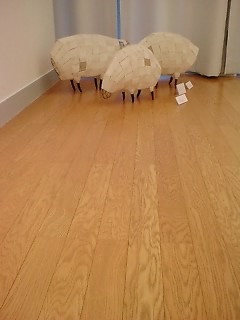 Now, the folks have returned to England, I'm back at work, autumn is upon us, and we're collectively hurtling towards the end of the year. Where on earth has this year gone?

Hope you had a good summer, wherever you are and whatever you did...
Posted by Globalism at 3:20 am No comments: