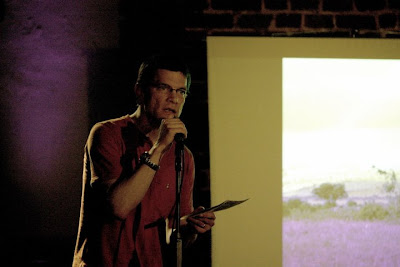 Photo: Nikki Acott
Last night I returned to the boards upstairs at Three and Ten for a reading at Sparks 11, my second appearance at the event. I read a (slightly condensed) version of 'Branded By The Bush', a short story I wrote a few years back which was based on an incident that happened to me whilst on my first safari in Tanzania.

I was asked to go on first, so got to be the warm-up for the event. It's a cosy venue and Brighton audiences are notoriously difficult to impress (their cultural cups spill over with choices on any given night of the week), so I gave it my best shot. Luckily, the story seemed to be a hit. As the clocks have now gone back and winter is beginning to draw in, it was rather nice to revisit the baking heat and those African skies one more time too.

The rest of the event was high quality. Each author has a specially commissioned image projected behind them while they read, something that I think really adds to the ambience. The other storytellers were great - each different from the other but with their own styles, slants on life, and ways with words. I was rather surprised to see people coming from quite far afield to share their stories too, even Hertfordshire.

At the end, I was told that there are going to be some Sparks events coming up in London at some point next year and asked if I'd be interested in putting in another turn. A chance to jump at, methinks. It might actually finally prompt me to get down to writing some new material too, which is long, long overdue!

Kudos to Jo for organising the event(s) and the other authors/photographers for their parts played in a great night out. Video coming soon, apparently. More travellers tales here, for the interested.
Posted by Globalism at 10:02 pm