Shelf Life get some new fans 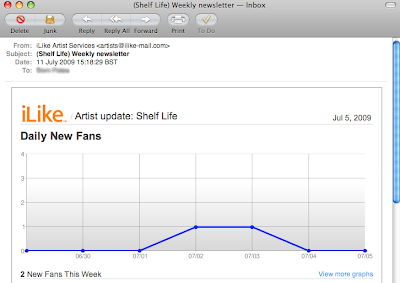 When you're signed up to several internet services at the same time, a lot of the mail that fills your inbox tends to come from these sites. Out of the personal email that I get on a regular basis, probably only about 5-10% is from friends or family. Pretty much how it is with physical mail through the door really.

Like many of the sites that I have some kind of presence on (far too many according to my wife, and she may well have a point) I get a weekly email from iLike.com, which tells me of the activity that's gone on at my Shelf Life profile. I've done very little in terms of promoting this profile so far, and that email usually tells me that nothing's happened since nothing last happened.

Today's email alerted me to Shelf Life having gained two new fans. Although it's easy to get pretty cynical after a while with social media ('Barack Obama is your friend on MySpace!', 'Madonna is following you on Twitter!', etc...oh really?), I was rather pleased with this little gem. After all, someone somewhere in the world had presumably dug my band's tunes enough to nail their colours to the flag.

The band also appears to be making a little bit of progress over at the iTunes Japan store. No idea who's buying downloads of our songs and no word from iTunes about it yet either, but I'm guessing that a maximum popularity rating must translate into sales somewhere down the line. 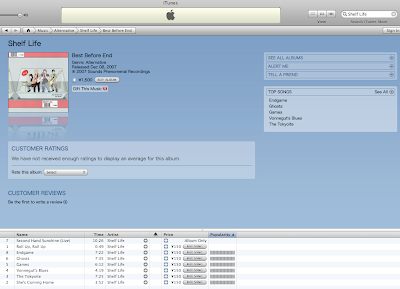 It seems to me that one of the many paradoxes of the web is that with user-generated content (UGC), you've still got to push and promote things that you do and make but at the same time it's far too easy to get distracted, waylaid and sent off in a different direction from that which was intended (thus making it harder to concentrate on one task, such as promoting some content).

As C&M put it, 'Build it and They Will Come' was never a good maxim for the web. While it's great that a creator in the internet age can bypass all the traditional channels of content distribution and connect directly with their audience (and therefore customers), without some form of effective promotion of that content, it's just another lonely file in a vast, vast ocean of bytes.

In the case of music, many artists have long been aware that the industry is stacked pretty heavily against them (see Courtney Love's famed diatribe against the music industry for further background, if you've not come across it before), and making a decent living from making music is about as easy as finding a large community of expat Americans in Pyongyang.

Even though the industry itself is still fighting hard in their losing battle against the existence of the internet, musicians of the digital generation are blessed like no other musicians that have gone before them. They can instantly connect to a global audience and set the terms themselves, without getting stung by contracts where they might scrape a few cents together over the years they produce their work. Most of this new generation would likely have little or no conception of how many hoops they'd have to go through and milestones they'd have to pass to even get a song played on the radio in the 50's or on TV in the 70's.

However, this amounts to absolutely nothing if there's no promotion behind it (possibly the best future path for savvy record companies is to mutate into online PR and marketing agencies, once they've monetised new models of operation, to help today's up-and-coming minstrels to get heard above the tsunamis of tunes available online). And the 'blip generation' gets so easily distracted by the myriad of media channels and producers of content all simultaneously vying for their attention that it's much harder for a band to both build a loyal core audience and to find the time to push themselves through all the channels open to them.

Still, if you're not expecting to make enough money from downloads etc that you'll be able to retire from the day job early, it's a great feeling to throw some tunes out there and eventually have them found and dug by someone!

Posted by Globalism at 8:45 pm