'A More Perfect Union' (Full Speech)
It's common and natural to take pleasure from being right. Who, after all, wants to be proved wrong? Sometimes, however, being right is the wrong thing for all.

Two US election cycles ago, back when stakes didn't seem quite as high as they do today in terms of the threats to our global future and American elections were still more of concern for Americans than for the rest of us too, I remember the deep concerns I felt about the Bush Coup in Florida. He'd run a relatively innocuous campaign and there didn't seem to be a whole deal of deep blue water between Bush Junior and Veep Gore, so there was a feeling that it might not matter too much which one became the next President Of The United States (POTUS). Not knowing the name of the leader of Pakistan or claiming to think that the Taliban were a pop group added to Junior being built up to be 'the kinda guy you'd like to have a beer with' (despite actually being a former alcoholic), whereas Gore was just 'too clever' to be President.

The rest being history, we now know that Junior turned out to be a lot less 'compassionate' or even 'conservative' than he appeared to be on the campaign trail and Al Gore went on win a Nobel Peace Prize - the differences between them that were played down at the time couldn't have been starker in the end.

I wasn't at all happy to be proved right about it, but once Junior had managed to grab the keys to the Oval Office, I just knew that there was a war coming. I didn't quite imagine that there would be two, three, many of them or that much of the world would become considerably more militarised than it needed to be, but either a feeling in my bones or an ability to sniff the prevailing global winds told me of more dangerous times ahead.

Being an optimist at heart, I consoled myself with the thought that no matter how bad they (Team Bush) made it, no matter how much damage they might do, a very possible upshot of it all could well be that Junior serves as the nail in the coffin of the 'rich, white, male POTUS', and that he would so discredit his creed by his actions in office that the American electorate would finally be ready to try something different. This in turn would be a good thing for those of us outside of US borders, for when America sneezes, the rest of the world catches cold.

This adage may now be less true than when Junior grabbed the wheel as he has been a most careless driver and in attempting to be the most forceful vehicle on the road, he took his eyes off his mirrors and allowed himself to be if not yet overtaken then likely to be soon. The Indian and Chinese cars on the road are looking in much better shape than eight years ago and there's some pretty nifty Brazilian and Russian ones too. 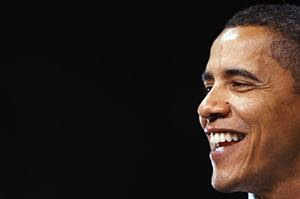 Anyway...back to the point. I'm going to dare to say it and stick my neck out with another prediction. This may not seem like such a revelatory thing to say, but that merely illustrates how much things have changed over the last eight years.

BARACK OBAMA WILL BECOME THE 44TH PRESIDENT OF THE UNITED STATES.

This will be, on the whole, a very good thing. Whoever inherits the job is going to have a hell of a mess to clean up, for starters. If there is going to be any clearing up to do, it will take someone really smart - not 'book smart' but 'wise from experience' and able to look at things from other perspectives - to be able to do the job well. There is no restoring America to the position it was in on the global stage before Bush, the world has changed too much for that, but there is the potential for the US to become the 'force for good' that it likes to think of itself as (and that doesn't mean military force). It may be that this can only happen when the person fronting the nation state operation doesn't obviously come from that long line of rich white Europeans that have been running things for so long, but is actually a blend of all the peoples that make America what it is. 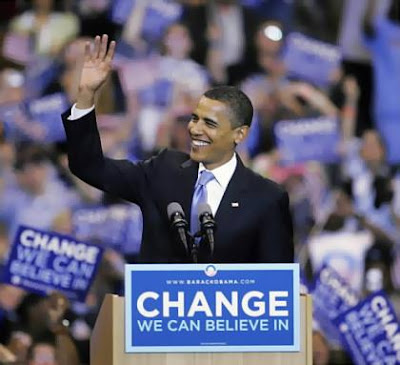 Barack Obama is clearly a very smart guy. In terms of changing America's image abroad, his election would do that with one fell swoop. He's shown his ability to persevere and win graciously by beating Hilary Clinton in the primaries and then bringing her on board his campaign (she's gone from an attacker to an firm advocate in a very short time), suggesting that he can do the same with the Republicans. There is a lot of uniting needed to be done in order for the US not to become some battered and wounded animal that lashes out at the rest of the world in the future.

This is not to say that he would be perfect. It is an impossible job, after all, and all our leaders in the end fail, somehow or other. But I will nail my colours to the flag (so to speak) and state here that I believe he will get the Presidency and will do a pretty damned good job of it too. This matters now to the rest of the world as well as the US so much more than it ever has done before.