Love this one. In Kathy Hind's words:

By observing the resting of birds on telegraph lines, it was soon obvious how much the lines resembled a music score or piano roll. Thus, a computer-vision program was developed in order to scan a video of the birds behaviour to translate it into music, by triggering audio samples of a music box and a prepared piano in the same fashion as a modern step-sequencer.

Going along to see her talk about sound maps in London next month.

Making my mind up on a SoundMap...

I've not written about anything I've been doing for my MA yet here on this blog. This is partly because since I started the course, back in September 2011 (around the same time as a new job), I've been so busy in trying to keep up with both the job and things like the reading list that it's been very difficult to find the space for it. However, I think I've reached a point where a post has become necessary.

I'm sat here in a Mac suite at Sussex University, running Chrome stuffed with open tabs. My research trails, thoughts and ideas seem to be tripping over themselves as I try to solidify them into something that is going to actually be achievable in the time I have. A plan is needed, and sometimes plans only become clear when they're written down (or in this case typed out).

This term, I am taking a course called 'New Developments in Digital Media'. It's a blend of theory and practical work, and has been quite a fascinating journey so far. The practical side of it involves a couple of projects that utilise existing web technologies to come up with something new - basically, a web mash-up.

The first project was about learning how to do stuff in Google Maps. I put together a map that showed places around the world that I have visited, with a bit of content (mostly pictures) from each visit. The results of that are below:

Trouble is, this is way more difficult that just adding a bit of HTML embed code to a Google Maps placemark (which is essentially all the above is).

I've got an old Shelf Life song which I have all the stems for. It would be fascinating to offer that one up and see what journey it took. Thing is, I'd probably need to dive in to an existing remix community and build up some relationships to get anything out of it, which would also involve putting a 'campaign' together around it along with having a load of extra stuff to write to go with it. That would take time I don't really have, even if the longer term benefits would be great (more engaging content for the project, people to work with on stuff in the future).

I really want to be able to create something like the Edinburgh Fringe map below, where the placemarks are clickable and will play an audio track when clicked. So far, I've not been able to find out how something like this could be done. It seems quite simple for people to contribute their recordings to the map (instructions here), by adding content via SoundCloud that has Fringe in the title and a location in the metadata. I fear though that getting it sorted out via the backend would mean having to get to grips with SoundCloud's API, and I'm not sure I'm ready (or got the headspace) to start getting to grips with deeper programming knowledge.

SoundCloud would be a fantastic platform to work with on this project. It seems that AudioBoo would also work well, and it also has a relatively easy means of getting audio content mapped by pasting an RSS feed URL from a user's account into a Google Maps page and changing the .rss extension to a .kml extension (being a form of geocoding that Google Maps understands), as in the Hong Kong sound map below:

Trouble with that one is that it doesn't seem to have the audio player element. Setting up some kind of RSS feed that people could submit tracks to a page connected with that feed which populates on the map would be ideal. All my research so far suggests that this would be far more difficult than it initially sounds.

I'll be leaning on Lawrence Lessig's 'Remix' for some of the theory that will be needed to back this project up. Lessig also donated a spoken word piece to the ccMixter community to launch his 'Strike The Root' project, which resulted in something like 100 tracks being created in a month. Mapping where those tracks were made would tie in very nicely with the theory element, but there is quite a bit of digging to find out the locations of a bunch of the contributors, and I still need to figure out how to embed audio in a Google Maps placemark (anyone know how to do this?).

All I know now is that I'll have to come to some decisions soon and start putting the work in, otherwise I'll get overwhelmed with yet another project that I take on which is too big to manage!

Any thoughts, comments, or help on the above will be gratefully received. Anyone interested in more cool sites where maps and sounds meet should check out the British Library's sound maps collections, Tracks On A Map, SoundSeeker or even CitySounds (not strictly a map, but cool all the same).
Posted by Globalism at 8:04 pm 2 comments:

Thought that 'the battle to save the Internet' was won with the defeat or shelving of SOPA? Think again. To paraphrase Clay Shirky from the last video I posted here, the price of a free Internet has to be eternal vigilance, it seems.

What's next? Here are 10 things about ACTA, an international trade agreement now signed by representatives from 31 states.

The Anti-Counterfeiting Trade Agreement (ACTA) is a plurilateral agreement for the purpose of establishing international standards for intellectual property rights enforcement. The agreement aims to establish an international legal framework for targeting counterfeit goods, generic medicines and copyright infringement on the Internet, and would create a new governing body outside existing forums, such as the World Trade Organization, the World Intellectual Property Organization, or the United Nations.

The agreement was signed on 1 October 2011 by Australia, Canada, Japan, Morocco, New Zealand, Singapore, South Korea and the United States. In January 2012, the European Union and 22 of its member states signed as well, bringing the total number of signatories to 31. After ratification by 6 states, the convention will come into force.

Supporters have described the agreement as a response to 'the increase in global trade of counterfeit goods and pirated copyright protected works'. Large copyright-right based organizations such as the MPAA and Pharmaceutical Research and Manufacturers of America were active in the treaty's development.

Opponents have lambasted it for its potentially adverse effects on fundamental civil and digital rights, including freedom of expression and communication privacy. Others, such as the Electronic Frontier Foundation, have derided the exclusion of civil society groups, developing countries and the general public from the agreement's negotiation process and have described it as policy laundering. The signature of the EU and many of its member states resulted in the resignation in protest of the European Parliament's appointed rapporteur (Kader Arif), as well as widespread protests across Poland.

Above and below images issued under CC-BY-SA licence.

La Quadrature du Net is an 'advocacy group defending the rights and freedoms of citizens on the Internet' who describe ACTA as 'one more offensive against the sharing of culture on the Internet'. Their main website is in English and French. Check the links to learn more.

This wiki page from La Quadrature du Net details lots of actions that can be taken by those who oppose ACTA.

A big one from Avaaz.org and a smaller one for HM Government (UK). Another one from Access Now. Click on the screenshot below to go to their page detailing Europe-wide protests against the agreement on February 11th. 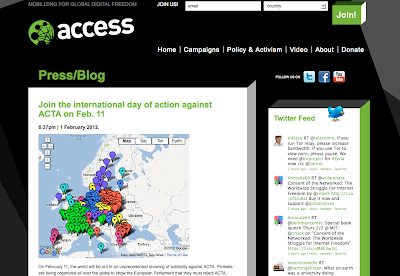 We're getting to crunch time. The ball is now very much in the European Parliament's court. The good news is, that gives you a chance to say why we think ACTA is such bad news. Finally, a mechanism to influence the course of this international agreement.

Find out more about what Open Rights Group have to say about ACTA.

European Digital Rights says that ACTA will have 'major implications for freedom of expression, access to culture and privacy', and have launched a 'What's Wrong With ACTA Week'. The page linked to also contain briefing documents aimed at presenting the key areas that this agreement aims to cover. Another good booklet of theirs is 'What Makes ACTA So Controversial (and why MEPs should care)' - also available in many other European languages.

OK, so here were my 10 things about ACTA. Some parts of this post are a little sketchy though. What legal decisions have you come across that favoured fewer restrictions on copyright rather than more? Do you know any other good examples of content owners that have benefited from a more open approach to their work, or who have 'gained from sharing'? Add your suggestions in the comments below and I'll update this post with any good ones that come by.

Posted by Globalism at 9:50 pm No comments: