The thirst for oil continues... 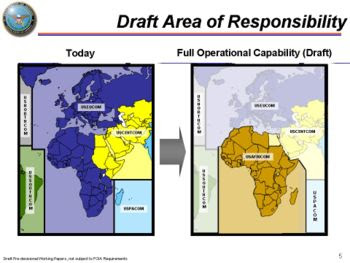 The new 'Scramble For Africa' has begun. This time, it is not between competing European colonial powers, but a race between the US and China. It comes at a time that the continent is facing perhaps its gravest threat since the period of European colonisation, that of human-caused climate change.
Last month, following a series of air strikes in Somalia, the Bush administration announced their approval for a Pentagon plan to establish a commmand centre for Africa (USAFRICOM or AFRICOM) to oversee US military activities on the continent. As Salim Lone, former spokesman for the UN mission in Iraq, writes in Common Dreams, this new engagement 'is the last thing the world's most impoverished continent needs.'
When the Chinese president toured eight African countries to negotiate oil-related deals and announced multi-billion dollar aid deals, the move was roundly condemned by Western commentators on the grounds of the ignoring of human rights violations in nations such as Sudan and Zimbabwe, plus undoing much of the efforts made by politicians and campaigners in recent years to unburden Africa from the decades of debt enslavement and poverty. Yet when the US expands its primary reliance on the use of force to pursue its strategic interests to a part of the world with the most to lose by such an action, there is barely a peep of concern to be heard. 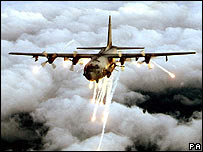 There are many wars still raging or areas continuing to experience post-conflict tensions in much of Africa, including still raging Cote d'Ivoire, Eritrea, Ethiopia, Somalia, Sudan, Democratic Republic of the Congo, Rwanda, and Zimbabwe. Nevertheless, in previous decades there have also been notable successes in ending long periods of conflict, such as Namibia and Mozambique.

As Lone writes 'Africom will...militarise American relations with Africa, and militarise numerous African countries. It will also tilt these countries' policies towards the use of force. And it will inflame Muslim passions and create more angry militants opposed to a US military presence in their country or region'.

In fiscal year 2003, the US Department of Defense itemised ownership or rental of 702 overseas military bases in about 130 countries, with a further 6000 bases in US territory. Clearly, with the setting up of AFRICOM, the intention is to expand that number across Africa.

When will the human race learn that force only generates more force, aggression generates more aggression, and that stealing other people's resources only encourages them the push back against such actions? When will we finally begin to recognise other people in other places as just the same as us, and treat them equally?

Nelson Mandela said, 'If you want to make peace with your enemy, you have to work with your enemy. Then he becomes your partner'. A better world for all is possible when we stop looking for enemies and start looking for partners.

I applied for a new job recently. It was in London, and although the job was potentially a very exciting opportunity, part of me was rather unsure about the idea of going back to the UK. I'm sure that some of what I originally felt compelled to leave behind, such as miserable standards of public service, would still be there.
Seems I didn't get selected for the interview anyway. Contradictory as it might sound given the above comment, I was felt a little down about this fact. A 'my country pushed me out and now it won't let me back in again' sort of thing!

Anyway, I left the house today and headed into Central Tokyo for a meeting. It was kind of good to get out amongst the throng again and remind me where I was. On the way back home, I dropped into my little suburban post office for a remittance I needed to send.
It took quite a long time for the man behind the counter to process my order, more than half an hour. This situation was most troubling for him and as I sat there playing Solitaire on my PDA, his brow was knotted in a permanent frown as he cradled a telephone next to his ear.

Eventually, he was able to sort out all matters problematic with my form, double check them with me and finish what I had come in to do. To my great surprise, he was so concerned about the delay he had caused me, that he gave me a little gift to apologise for having detained me for so long!

Perhaps it may be Japanese post office policy and it may have only been a box of bath soaps, but the very fact of him giving me this gift to apologise for the inconvenience caused made me smile to myself.

When would this ever have happened in England? Probably never.

I was reminded of a time when I experienced British and French train travel within a matter of days of each other. There were delays on both journeys. The train from Normandy to Paris was held up by an hour due to some sort of engine failure and as I arrived in the station (possibly Gare Du Nord, although I forget now), I was handed a voucher to claim back a portion of the ticket price, in compensation for the inconvenience caused. The refund increased incrementally as the delay lengthened.

The following week, I was back in the UK. I tried to take a train from London Victoria down to Brighton, but it stopped at Haywards Heath with no warning or explanation given. Eventually I had to track down a guard who informed me that there was going to be a replacement bus service along soon that would take passengers on to the rest of the journey. No hint of an apology anywhere.

It really doesn't take a lot to give a little back when something fucks up, and it can sometimes really go a long way!

Posted by Globalism at 8:14 am No comments: