Best Before End by Shelf-Life
This is the second of two free albums offered on this blog as part of the promotion of my recently launched new website. As with the Control K album, feel free to download the tracks, pass them around, remix them or whatever, with two simple conditions:
'Best Before End' was written, recorded and released over a 12-18 month period, with the collection finally being issued in December 2007. The band is a four-piece, with me on vocals, Cheryo on guitars (and much more), his brother Chisato on drums, and Jun on bass. The sound is traditional guitar rock - think Beatles, think Clash, think Who, etc - with the occasional Japanese twist. The album was conceived as a concept album, intended to be listened to in one sitting, and covered themes like the Iraq War, the city of Tokyo and global warming.
It was first made available on CD, then given an iTunes digital release, and now released for free under a Creative Commons license. Although you can download the tracks for free, if you wish to buy them from iTunes, that's still possible and all proceeds go towards the recording of the next album.
We have begun the slow task of writing the next album, made that much harder because I no longer live in Tokyo. Once the writing has been completed, the intention is to record the album. This will be a big challenge as we'll be trying to do it with no budget, significant language challenges and again not being in the same physical space. Whether Shelf Life makes it to album number two remains to be seen, but the intention is definitely there!
Go to the Shelf Life page at PatesOnline to find out more about the band.
Posted by Globalism at 3:58 pm No comments:


A Tiny Day in the Jackson Hole Backcountry from Tristan Greszko on Vimeo.
Been meaning to put this one up for ages.
This weekend in the UK is the August Bank Holiday weekend, often thought of here as the end of summer. The seasons are shifting, parts of Britain are bracing themselves for another wet weekend (although it's beautifully sunny here in Brighton, at the time of writing), the US East Coast is getting ready for another huge storm - winter's going to start creeping around again soon.
In preparation, the above video will give you a taste of the good side of winter. All in miniature too. I do love tilt-shifted and time-lapsed video!
Posted by Globalism at 11:07 am 1 comment:

The Front Line (Redux) by controlk
As a part of the promotion for my recently launched new website, I am highlighting different features on this blog that are available in more detail over there. This post contains free downloads and an album player for the 2005 release of 'The Front Line (Redux)' - my most recent collection of work issued as Control K.
The album itself was originally available on CafePress.com as a press-on-demand order and sold mildly well (double figures at least). CafePress seem to have now removed the original files and thus the collection is as out-of-print as you can get in the press-on-demand age! Given my enthusiasm for Creative Commons, I've since taken the decision to issue the album online for free.
Feel free to download the tracks, comment on them, pass them around to others, and remix them if you want - just give me give an Attribution as Control K (preferably linked to www.controlk.co.uk if published) if you do decide to use them. Oh yes, and if you want to use them commercially, please come back to me and ask before doing so.
Yes, there are plans for future Control K releases, but there's also a massive backlog of other projects and works to get through first!
Go to the Control K page at PatesOnline to find out more...
Posted by Globalism at 11:13 pm No comments:

'Globalism - a declaration of intent' (or 'New website launched')

(Broad generalisation alert) Anyone who's spent any amount of time interacting with others online is likely to have come up with a pseudonym that might allow them perhaps to express themselves a little more freely than if posting or commenting under their own name. That pseudonym sometimes even comes with its own avatar, so that an image is also associated with the name used. Like many others, I have done the same thing and often tend to leave my own digital trails under the guise of globalism.
This has not stopped at the odd comment on someone else's blog or forum, but has also become an identity that I have nurtured to try and encapsulate a few of my ideas and my outlook on life. It has infused, for example, the pictures I take (Globalism Pictures) and the films I make or issue (Globalism Films).
Having also crafted a website to act as a portal to me online, it seemed logical to include a little more about globalism there too, to act as some kind of an explanation. The first half of that text can be found below. For the rest of it, please visit the recently launched http://www.patesonline.net and dig around there. Feel free to come back here and post your comments when you're done too.
***
Unlike globalisation, the economic process that views the planet as one giant market to be dominated and exploited, globalism (as defined here) can offer an alternative and positive outlook on worldwide human culture as a single entity.
Globalism is connected. The internet enables the peoples, cultures, networks and systems of the world to connect with each other like never before in human history. It provokes endless opportunity for the exchange of ideas, solving of problems and forging of new bonds. Furthermore, it acts as a repository for all human knowledge, a realisation of H.G. Wells' vision of a world brain. While this undoubtedly brings its own set of troubles, our interconnectivity offers an unprecedented platform for resolving problems. Globalism exists because the internet exists.
Globalism is diverse. Our world is the sum of its parts - a bewilderingly vast collection of peoples, cultures, races, faces, customs, languages, ideas and beliefs. Globalism openly embraces that diversity, recognises that different approaches can have equal validity to cherished wisdoms, and believes that there is no 'us and them', only an 'us'. Furthermore, it understands that as our fragile planet comes under increasingly greater threat from ourselves, it becomes ever more important to act in harmony with nature rather than against it. This helps to protect the world's natural diversity and shows we realise how connected we are with our environment.

Globalism is peaceful. Throughout human history, violence has been the dominant response for the resolution of conflict. Conflict itself is a natural response to an absence of harmony and can sometimes be necessary, yet violence can never provide a sustainable solution and is only ever likely to beget more violence. Globalism advocates for peaceful solutions to problems, embraces principles of non-violence and encourages the spread of these ideals. The road to peace is longer and harder than the road to war, but it is ultimately more fruitful for all.
Posted by Globalism at 11:34 pm No comments:

A couple of recent outings...

August has been a pretty funny month so far. I taught my last classes to ESL students, roughly 15 years on from my first ones. I turned 40, with the joy of a surprise party thrown in to the mix. I started a new job today, at the same company that I worked for before but in a different part of it (and now as IT Trainer rather than IT Teacher). Things are going to rapidly run away with themselves before I have a chance to catch up with them.
With that in mind, I'm hoping to be able to get a few short bursts of blog post in over the remainder of month. Next month it's going to get even busier again - I'll be starting an MA at Sussex University too (part time) - so I'll hopefully be able to fit a few of the things I've been meaning to blog about in that time.
Had a visit from my mother too. What do you do when your Mum comes to town, and that town is Brighton? Why take her along to Pride, of course! We did the same thing when my wife's Mum was over a couple of years ago, and that seemed to be a hit.
Once all that was over and there was a day of sunshine to contend with too, we took a short walk over the South Downs. Beautiful weather and great for clearing the head.
Posted by Globalism at 10:59 pm No comments: 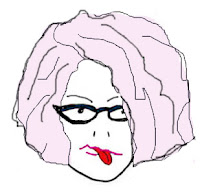 The original plan, when this feature was launched, was for a guest post a month. But then the summer took over, I got distracted by a number of changes and things I've been trying to finish off for aeons, and blogging fell a little by the wayside. Having made such great efforts earlier on this year at keeping this thing running and upping the ante over previous years...well, you know how it goes.

Anyway, despite my own lackadaisical efforts of the last month or two, I'm proud to announce Guest Post No. Two, and what a huge heap of fun it is too! It's also taken me a while to get this posted as I simply had to watch all the treats that have been sent my way for the post. Having done so, I'd suggest you either make a drink and give yourself half an hour for the fun and games below or come back to them in bursts - each video is a joy in their own right and is the largest number of videos included in one post here.
I'll leave Sarah to introduce herself, but I will add to her introduction that there is so much about blogging that I've learned from her. There's a lot more other stuff I've learned from her too as a colleague and co-teacher on the same course, but blogging's what we're on about here.

So a big thanks to Sarah, and enjoy what you find here!
***
Now, first off, thank you Dom, for inviting me over to your swanky new site, and apologies for the massive fail that was this post happening in July! *ahem*
I’m Sarah, I teach IT (that sounds like 'I know Kung Fu' from The Matrix heh heh) and Dom is both friendly neighbour and supportive colleague …. win win for me.
I have a nerdy/stitching blog called Pings and Needles (I don’t think anyone gets the Pings pun, ho hum) so please come and visit me over there. I’m currently working on a quilt for a competition at that temple to cryptography Bletchley Park ! …
I proudly present my personal Top 10 Rube Goldberg clips. The general idea behind a Rube Goldberg (or Pythagoras Switch) is to have maximum complexity or stages to accomplish a simple task.

Some of these are epic, some are just put together in people’s homes … go get yourself a cup/glass/yard of refreshment and settle in for some genuinely brilliant stuff.
1. 2D Photography - Watch and Gasp. The detail, oh the detail.

2. Baynham & Tyers - edited, but I love the way it travels through a whole house!

6. 'Exercise in Fugality' - George Rhoads - Kinetic Sculpture - strictly speaking this isn’t a Rube Goldberg, but it sounds good and I like it.

That’s my 10 … I hope you enjoyed a little time wasting - nothing like the amount of time these chaps put into the machines though. I feel happy with that thought.
Posted by Globalism at 10:13 am 5 comments: