Life is a losing game

Amy Winehouse...RIP.
Posted by Globalism at 11:09 pm No comments:

I've been trying unsuccessfully today and yesterday to upload the above video to YouTube. It's of a 2007 TED Talk by Lawrence Lessig, about the effect of copyright law on creativity. I like it for a few reasons, namely that I've learned a lot about copyright and free culture from Lessig (co-founder of Creative Commons), plus as a teacher of presentation skills, I really like how he presents - both in the way he speaks and in his use of PowerPoint.
One of the things that makes TED so widely known is that they allow people to download their content (in this case videos of their talks) and re-'publish' them. They do this under the Creative Commons licences partly devised by Lessig. I do this with some of their works through my YouTube channel. This benefits both TED and myself - I get people who are interested in some of the same talks to visit my channel and they get yet more free marketing of what they do from the visitors that I bring in.
The TED Talks I have uploaded to my channel so far have had a total of 46,525 views (as of today), of which I can guarantee that I have not made a penny. Under the terms of the CC licence, I am not entitled to make any derivative works - such as producing an edited version - therefore any advertising that is part of the original file I download remains in the copy I upload.
The talk is 19:08 minutes, and my YouTube channel previously didn't permit me to upload files of more than 15 minutes. However, I've recently noticed the below sign on the upload page, so figured it was about time to give it a try:

I figured too that if it was up on the TED channel, then it was possible for me to do the same. This is with the knowledge that YouTube themselves have recently embraced CC licences and allow users to make their videos available for download under an Attribution licence.
Anyway, as soon as the file had finally been successfully uploaded, I got two emails from YouTube, one of which is reproduced below:

WMG I'm pretty sure is Warner Music Group, the world's third largest music company. The other email mentioned UMG, which I'm guessing will be Universal Music Group, the world's largest music company. Oh dear, I thought, I'm usually meticulously careful not to violate copyright laws, no matter how much I agree or disagree with the full extent of them. One of my key reasons for using CC is that I can legally build on others work and allow people to do the same with mine, also within the law. One of the potential problems of these licences however, is that the reuser has to rely on the original producer having cleared all content in order for them to be able to do so under the terms of the licence.
The video (which you can view above, as embedded from the original TED channel) contains extracts from three copyrighted works, which are used to demonstrate examples of remix culture and certainly arguable as an example of 'fair use' (a US-only legal right). These songs are Gloria Gaynor's 'I Will Survive', Lionel Ritchie & Diana Ross's 'Endless Love' and a track that I think comes from The Muppets originally but which has been endlessly parodied elsewhere.
That I received these emails so promptly after a successful upload suggested to me that Google (as the owners of YouTube) have extremely powerful algorithms and processing power to be able to pre-screen a file for copyright violations prior to it 'going live' (no great surprise there - of course Google have tech with that kind of capability). It also suggests that they have an agreement with a broad coalition of copyright holders that would allow them to be able to match the sound waves of a copyright-protected audio file uploaded by a user against a database of protected audio (this is pure and wild speculation of my part, as my guess for how it would happen technically). My understanding was that under the user's terms, suspicion of a copyright violation should be flagged up by the supposed copyright holder first rather than preventing it being uploaded at all.
Below are a couple of things that YouTube says about copyright and violation of it, from their FAQs:

YouTube respects the rights of copyright holders and publishers and requires all users to confirm they own the copyright or have permission from the copyright holder to upload content. We comply with the Digital Millennium Copyright Act (DMCA) and other applicable copyright laws and promptly remove content when properly notified.

We provide content owners with the ability to control the use of their content on YouTube. Because content owners have the right to change their mind about how their content is displayed on our site, it's possible that content that was once allowed is subsequently blocked. Also, it is possible that multiple parties hold rights to a different components (e.g. audio, video) of a copyrighted work. While one owner may allow the use of their material on YouTube, another may decide to disallow use.

After scratching my head at the emails, bemused at how easy it seems to be to inadvertently break the law these days (plus going to Google to find out who WMG and UMG were), I went back to the file upload page to see the following:

Hooray I thought, it looks like it's gone up at last. A quick check of my video dashboard however, showed this:

The audio track had been disabled and it was described as 'blocked in some countries'. Hmm.
I then went to the URL for the video itself, which YouTube had given me, and found this: 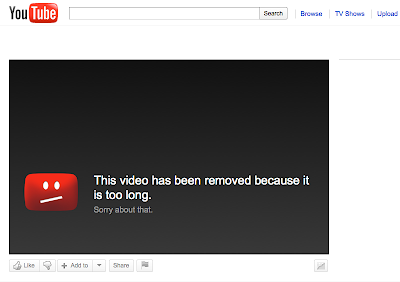 If you're still with me thus far, you'll remember that YouTube had proudly told me that I was entitled to upload files of longer than 15 minutes. More than 15 but less than 20? I doubt it. A bit of a disconnect with what they talk about in terms of copyright violation though.
I'll draw no particular conclusions at the end of this post but have opted to share this experience as I feel it raises a number of curious questions.
I'll leave it up to you, dear readers, to see what questions it raises for you, if any...
Posted by Globalism at 6:22 pm No comments: