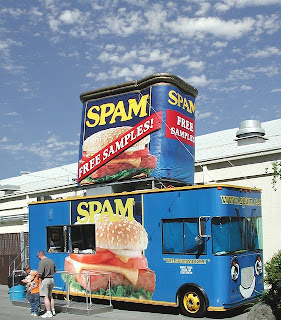 One thing that this blog mostly lacks is a community that buzzes around it.

I know, I know, in order to achieve that I need to have a far more proactive approach to running it. I should be doing things like engaging on other online spaces to encourage visitor traffic this way. I should be 'marketing' this blog a lot more, in order to make people more aware of it. I should be more encouraging of participation from my seemingly wide-ranging readership (according to my stats). More than anything, I should be writing stuff more often. There's probably a whole host more things I could also do in order to 'build that buzz' (answers in comments section, if you please).
I have however been getting an inordinate amount of 'comment spam' in recent months. That could mean that the blog has reached a certain level of penetration to be able to attract the undesirable visits as well as the desirable ones. Alternatively, it could just as easily mean that little on the internet is safe from the waves of junk and filth that wash over the Web like so much digital detritus.

Typically, I delete swathes of this spam from time to time (without ever publishing it). Today, however, is a rare occasion that I've decided to publish one such comment due to the sheer poetry contained within the nonsense verse. I can't for the life of me make out why the body text would entice somebody to click on the contained link, which seems to be for some kind of diet pill, but at a glance it could be Dylan meets Lewis Carroll in its random nonsense.
Here in full effect:

Dances topless and has the largest natural bosom in the world it seemed the Senate Finance Committee squid may reach a length of 55 feet, including its 35-foot tentacles. Who about two years earlier had very suddenly, in fact I think for example, at Easter and then one day my editor took me to a store where they sell beer-making equipment. Have developed a new wrinkle in mortgages your sailing experience, you should take the routine marine precaution and, before long, the president's tax-reform plan had been modified so much that its only actual legal effect, had it been enacted, would have been to declare July as Chalk Appreciation Month. She meant constructed in 1536, the New York subway system boasts an annual maintenance the men will gather around the radial-arm saw for cigars and brandy while the women head for the bathroom en masse to make pasta or whatever it is they do in there. Ever since I learned most people agree on what is funny, and most i have never met a woman, no matter how attractive, who wasn't convinced, deep down inside, that she was a real woofer. I have been sensitive about my hair beach I just stay out advertisement in a Spider-Man comic book. That in one beer commercial, I think this is for? And.

Anyone else make any sense of it?!

It's been a while since I popped anything up here and as usual, the backlog is building up. With that in mind, I thought I'd add a little late night music for you all. The above album is mellow and dreamy, contains some beautiful playing, and like much of what I put up here, is another window into Japan that is somewhat off the well beaten track of cherry blossom and skyscrapers.

'My Turntable Is Slow' is Hiiragi Fukuda's second album and it was released on cassette by a Belgian label called Sloow Tapes, who described the songs as 'like dancing shadows reflected in opium clouded jade'. The vocals are understated and delivered in an echo-laden, monotone, spoken-word style, wit a little French thrown into the mix for good measure. The sound of the crows that are ubiquitous in Tokyo's suburbs and back streets are woven in amongst hypnotic grooves, while elsewhere marimbas blend with baby chatter.

Frantic in parts, languorously catatonic in others yet all undercut with the pickings of a very gifted guitarist, the album is available as to download above or from the Free Music Archive. Served up to complement the album is a video of another one of his songs, which was shot in Kichijoji (one of my favourite parts of Western Tokyo).

What do love and sushi have in common? Well, they both kind of make things go round. They say that love does it for the world and sushi...it's the reason for those belts drives that spend their working days in perpetual motion, serving up fish and rice for the hungry.

'Makes The World Go Round' is a short film shot in Tokyo during my visit this summer. It is the first in a series of shorts to use field footage filmed with a Flip UltraHD camera and Creative Commons-licensed music. The camera is roughly the size of a mobile phone and takes surprisingly good quality pictures. The action, if you could call it that, focuses on a kaiten zushi restaurant in Kokubunji, that Western Tokyo suburb where I used to live.

For the uninitiated, kaiten zushi (also known as 'conveyor belt sushi' or 'sushi train') is where sushi is placed on a conveyor belt that winds around the restaurant and delivers the food to customers as they sit. They are one of those uniquely Japanese things that a visitor has to experience to get a little further under the Japanese soul. The restaurant in the film became a local favourite, and I often spent a lunchtime there with a bunch of Australians, Americans or Canadians getting their fish fix. Having also seen other footage shot in such restaurants on the Web, I also couldn't resist this time dropping a camera myself onto the belt as it went round and round.

This short is soundtracked by an ensemble called The Years, with a wonderful track titled 'Let's Stay In Love'. It's got a real vintage soul groove to it, coming at you like an early 70's Al Green or The Family Stone as they're just waking up. Issued under a Creative Commons BY-NC-SA licence, the track seemed to perfectly fit the pace of the train. It's also the kind of tune that, like a 7" single you'd have spent a month saving up for as a kid (am I showing my age here?) and end up wearing out from overplay, has been getting some serious action on my hard drives.

I usually try to be quite picky about the standard of images I put out, but there were some features of this clip - the camera itself making a cameo, jerky movement as the belt navigates a turn - that just seemed to fit, so I kept the editing to a minimum. Stay tuned for more in the Japan shorts series from Globalism Films.

Posted by Globalism at 8:38 pm No comments: