Musical tastes can change so much over time, according to changes in circumstances or outlook. As a kid, the music I first made my own was the frothy 80's pop of the likes of Duran Duran, Blondie and Adam Ant. Discovering The Beatles at about 14, I immersed myself in their world, with the wider 60's pop plus the rock 'n' roll and blues that preceded them to pad it all out. Moving through my teens, I discovered The Smiths and plunged into UK indie pop. Then in my early 20's, I moved to Brighton and my aural pleasures expanded massively - electronic music, funk, reggae, hip-hop, etc.
Becoming more politically motivated again, with the election of George Bush back in 2000 and the subsequent invasion of Iraq in 2003, I have spent much of the past few years listening to the return of Western protest music (such as what can be found at Peace.fm) and in Japan created what is probably the first collection of modern Japanese protest music (with the Peace Not War Japan CD compilation). I have also opened my ears up to all kinds of non-Western music as a result of living here and travelling around a few other countries (eg Nepal, China, UAE, Tanzania). I often wondered how the artistic communities of the Arab world are responding to the rise in conflict and imperialism in their lands in recent years.
Today, I came across this gem. It's by a well-known Kuwaiti singer called Shams and is called 'Ahlan! Ezayek? (which translates as 'Hi! How are you?'). The video was apparently shot in Cairo, using high production values, and is quite a scathing anti-Bush satire. It references puppet governments, executions, 'democracy', Guantanamo Bay and Handala, a cartoon figure of a small boy that symbolises Palestinian identity and defiance.

Posted by Globalism at 2:17 pm No comments: 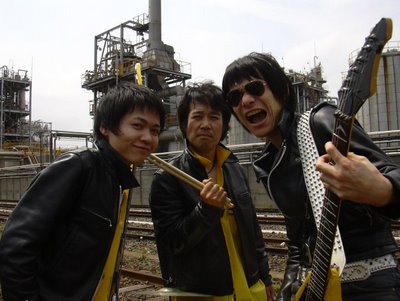 The first gig I saw that really knocked my head off was Sonic Youth on the 'Goo' tour, in Cardiff in 1990. I couldn't even really work out what was happening, musically speaking. Since then, I've witnessed Nirvana's wanton stage destruction, seen Iggy's brazen stage antics and My Bloody Valentine's ear-splitting tonal assaults, along with all manner of other rock 'n' roll lunacy, from Julian Cope's madness to Super Furry Animals costumed playfulness. I never saw The Pistols, I never saw Lou Reed shoot up on stage and fortunately never witnessed G.G. Allin's coprophilic acts. Nevertheless, I still feel that I can justifiably say that I've witnessed a whole stackheap of damned good rock 'n' roll.

Last night, by sheer accident, I saw what had to top the lot of them and leave 'em all for dust. Most likely, you'll have never heard of them. Neither had I. That's the beauty of standing around in a place with no expectations - if you're very, very lucky, sometimes a band will come along that'll just change how you think about whatever it is that you're digging. That band come from Fukushima, north of Tokyo, and they are called Blue III. Say it aloud, go on. Yep, they take much of their inspiration from Bruce Lee, which is a lot more rock 'n' roll than you might think.

I'd gone down to see another band, Tokyo Pinsalocks. Nice enough, dug it and all that. An all-girl electro-rock trio who should probably be the opening act on the first music festival on the International Space Station. Hung round a little while after, chatted to a few people, was about to leave. Then, the volume's louder all of a sudden, so I peek back into the room again. There's something like an instrumental version of 'The Boys Are Back In Town' playing and there are three guys on stage, clad in leather and sporting huge frightwigs (including a couple of the meanest fros I've seen this side of 1972). They're miming along to the tune with tiny cardboard Flying V guitars, pulling all the right poses and faces. Looks like a laugh, I thought. Maybe won't disappear just yet.

The song ends, the wigs and leather jackets come off and they're all in yellow kung-fu tops - 'We are Blue III....AAAARRRGGGHHH!!!!!' and they're off. From the minute they started to long after they finished and I was on the train outta there, there was no let up in the energy.

All look the same - rock 'n' roll uniform, very cool. The guitarist and bass player have bright yellow (gaffer-taped) Flying Vs with radio pick-ups on, so totally wireless. Before you know it, the guitarist is running into the crowd, flinging rocking notes out in his wake, spinning around the venue, outta the door, through the back stage and back on again.

Every classic trick in the book, you know the ones you've seen from your Dad's old Hendrix videos and all the rest, gets pulled out, torn up and reborn at a higher level. The bass player plays his bass behind his head, the band play their guitars not with violin bows a la Jimmy Page but with light sabres! Sonic Youth used screwdrivers to attack their guitars - these guys used nun chuckas!! The singer's pretty handy with them too, even when he's not using them to thrash his instrument. He gets on the bass players shoulders, they run around the venue and he doesn't miss a note (still playing whilst up there).

Musically, it was like shoving your head straight into a bucket of every beast of a rock tune you've ever dug. Irony and skill, mashed up. The Darkness doing kung-fu. Asian AC/DC. The blues, pulled out through The Stooges intestines and wired up to a Tokyo power line - dose after dose. The Ramones, fresh off the bullet train and ready to go.

They could really cut it too. The drummer never let up on his frantic, pounding beats. The singer leaves his guitar feeding back on the stage, then goes up to the drummer and joins in the beat. The drummer then jumps into the crowd and gets almost the entire audience in a circle, kicking their legs and grooving hard. Now Japanese audiences are very much like British ones - stand back, arms kinda folded, with an 'I'm the hip one, go on, impress me' attitude. Blue III forced everyone in the room to abandon any delusions to their own cool and abandon themselves to the growing pulse of energy that was sweeping the space. Drummer gets back on stage, takes over behind the kit again, singer them does the same with the bass player. Takes his bass off him and starts playing it himself, all the time without missing a hard rocking note. Bass player dives into the crowd, energy keeps on growing.

It ended, as all good things do. It took me hours to wipe the smile off my face and stop my legs from moving to the same pounding beat that was continuing to thump around my head. But I emerged from that show realising that I may never see a band that is going to top them.

The website's all in Japanese, so if you don't read that, it won't be of much help. Someone has to take this band and spread 'em across the planet though.

If you ever happen to come across a live listing and the words 'Blue III' are on it, don't even hesitate, JUST GO!!
Posted by Globalism at 11:52 am No comments: