'Japan From The Inside' - Blurb Contest results 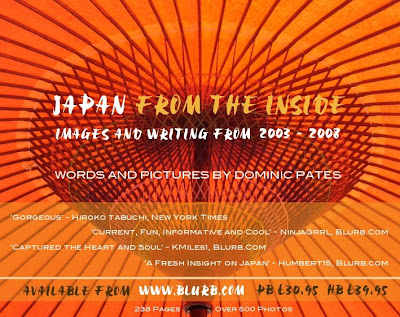 The winners of the Best Blurb Books Contest, which my book was entered in, were announced last week. Although 'Japan From The Inside' didn't make the final round of judging, it was up against very stiff competition and I was thrilled with the results of getting the word out. The book got a total of 72 votes and some great comments from people that came and previewed it, including a tweeted review from the Tokyo Correspondent of the New York Times.

I'd like to extend a massive thanks to everyone that voted, looked through the book, helped spread the word or even bought a copy. Without readers, books are little but the remains of what was once a tree. For visitors who've not seen this one, click on the image or link above to go through to the book's web page.

Although it might be a little late now that the contest is over, I've taken some of the feedback and added it into a flyer for the book. The intention was to get it done whilst I was still marketing it, but sometimes there's just not enough hours in the day to fit in everything you want to do. Marketing the book itself was an educational experience and it's left me with a stack of ideas for getting the word out about future projects.

There's plenty more writing stuff in the pipeline at the moment, but the next project is going to be a new Control K track. Yoko Ono's released the stems of a song from her latest album under a Creative Commons licence and is inviting remixes. Couldn't resist this one - the question is whether I'll be able to get something decent completed in time for the deadline!

Posted by Globalism at 11:25 pm No comments: Links to this post

This is Japan! from Eric Testroete on Vimeo.

While doing the promotion for 'Japan From The Inside', I got plenty of feedback in terms of emails and comments (coming here soon). My cousin also sent me a link that had been forwarded round his office, which I couldn't help but put up here.

The video above is about as frantic a tour around Japan as you can get in a few minutes. Stacked with plenty of classic Japan iconography, it also comes with a bit of a health warning - this tour is fast.

Posted by Globalism at 7:28 pm No comments: Links to this post

A Tale of Two Presidents 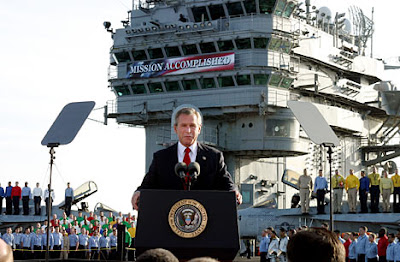 President George W. Bush declares 'Mission Accomplished' for combat operations in Iraq, 2003 (Associated Press)
During the course of a lifetime, six years can be a very short time. Yes, an individual will go through many changes during that period, but for many people, their sense of how they project themselves will change very little.

In global geopolitics however, six years can be an eternity. When responding to a journalist's question of what is most likely to blow a government off course, former British PM Harold Macmillan famously described 'events, dear boy, events', telling us that no matter how forcefully a government plans and enforces its ideals, there'll always be something that can force it to change direction.

As a government represents a nation on the world stage, so the Head of the Government thus epitomises that nation to the peoples and governments of all other nations. I have chosen two pictures for this post that I think represent such a radically different projection of a nation that they could almost be two entirely different countries; one picture of which has just been released and the other of which is now over six years old.

Above, is an image of the previous President of the United States (still currently the most powerful and influential country on the planet). In the picture, George W. Bush stares confidently and defiantly into the camera, backdropped with personnel and apparatus of a navy warship and a banner declaring 'Mission Accomplished'.

The picture tells the viewer that the US is strong, a military force not to be reckoned with, and a dominator over its foes (by extension, over all). In the picture, Bush is clearly addressing a domestic audience to reassure them of the nation's strength, yet the message is also aimed at a global audience to reinforce fear or deferential respect for the US. 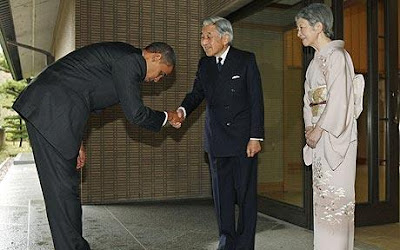 President Barack Obama greeted by Emperor and Empress of Japan, 2009 (Reuters)
In the above picture of current US President Barack Obama, depicted at the beginning of a tour of Asia, we can see an utterly different projection of the US to the world. Obama has his eyes cast downwards rather than staring directly into the camera, and he is giving a deeply sombre bow to the Emperor, the traditional form of Japanese greeting given to anybody regardless of their standing in Japanese society. Emperor Akihito and Empress Michiko and clearly delighted to receive their guest, given the expressions on their faces.

Such a picture would simply not have happened prior to Obama's presidency. During the Second World War, Japan and the US were prime adversaries. As a condition to their surrender during that war, Japan traded keeping their emperor in return for accepting American occupation. Prior to his radio announcement that Japan was surrendering to the US, Emperor Hirohito (Akihito's father) was considered to be a god by ordinary Japanese. Therefore, hearing his voice was a shock to a war-torn nation and amounted to a renunciation of his divinity. Bush's father even famously vomited in the lap of Japanese prime minister Kiichi Miyazawa at a diplomatic dinner in 1992.

The picture of Obama says that the US is respectful of local traditions or customs, and will act appropriately as an invited guest rather than insist on imposing its own way of doing things. It projects an image of the US that no longer takes a 'with us or against us' approach to international relations, but one of 'we're all in this together' and of equals on the world stage. Obama is stepping out of the confines of a purely domestic audience and addressing a global one (although whether he would be seen addressing Hamid Karzai in a similar manner remains to be seen).
Doubtless, there are many criticisms of the above reading of such an image that could be made, including that one single picture does not demonstrate a complete reversal of US foreign policy and that the US still has military bases across the planet that enforce its will. However, in our symbol-driven, always-on instant-media, modern world, I'd argue that this development is a massive and positive shift in the balance of global power relations.

If the United States can act with humility in the presence of former conquered adversaries, we are indeed living through most intriguing times and should at least have stepped back from the brink of the fears of the Bush era.
Posted by Globalism at 2:59 pm 2 comments: Links to this post