I had the immense pleasure of seeing this man live tonight - Mr Tony Allen, the co-founder of Afrobeat and Fela Kuti's former drummer. Although I arrived late to the show, the rhythms got me grooving immediately and the strains of the week fell off like scales. An incredible drummer that made it all look so effortless, Allen was a congenial host, the atmosphere was so warm and welcoming, and the music was just fantastic. My feet kept moving for a long time afterwards.

It was my first concert at Brighton Dome, which was a little funny after all the years I spent going to gigs in Brighton. Made it to the Budokan before I set foot in a major venue in my own town. Brian Eno's curating this year's Brighton Festival and had brought Allen to town as part of his programme.

When I lived in Brighton during the 90's, I participated very little in the festival. Now I'm back in town have been determined to take greater advantage of England's biggest arts festival going on for a month on my doorstep. However, with the DELTA hurtling towards a conclusion (of sorts) and the demands of work not leaving me with a great deal of time to kick around town watching the world go by, I've had to let a lot of this year's events pass. Still, every now and again, something happens that you have to just drop things for and just go and do. Tony Allen was just one of them.

Next stop, The Brighton Beach Boys!

...Britain, once again, has a Tory PM. Despite the seeming inevitability of it, despite the surprises of the past five days, despite the economic mess that Cameron inherits and the platitudes to progressivism he espouses, I can't help but feel slightly shell-shocked by this news. I'm can't help but feel that this doesn't bode particularly well for the next few years. I guess that even though the political tribalism that once ran so thick through my veins may have waned over the years and was no longer able to show its face at the last election, the visceral hatred I felt over the government I grew up under still echoes down the years.
Hold on folks, we might be in for a bit of a rough ride. Fingers crossed that those yellows in the pending Cabinet will manage to rein in some of the wilder blue tendencies. Perhaps if it results in a fairer voting system and a more electable Labour Party in the longer term, it'll end up having been a bullet worth biting. 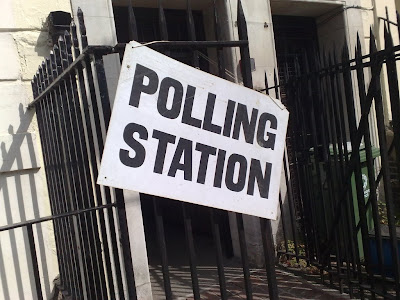 Photo by secretlondon123
Standing in my polling booth, the space where the white noise in my head that had been the huge quandry over who to vote for in Britain's 2010 General Election finally dissipated and I was left with nothing but five boxes and a stubby pencil in my hand. The waiting was over and there was nothing left to do but pick one of them to scrawl my two-lined endorsement into. Weeks of weighing up the pros and cons of a multitude of scenarios came down to 'Damn it, just pick one'.

So pick one I did. It wasn't one I'd ever picked before, but then this was that kind of election. It didn't produce the outcome that my vote was intended to produce either, and I awoke to the decidedly unpleasant feeling of learning that a Tory MP had been elected in my constituency - like hitting the morning alarm only to find that I'd grown a large, semi-permanent cyst while I slept - but then my neighbouring constituency elected the country's first Green Party MP to counter it.

The country that I somewhat reluctantly returned to about two years ago, having previously left it behind in disgust at its imperial revivalism between the Tigris and Euphrates, now faces a future that is currently anyone's guess. And for once, that's probably a good thing. It means that of the pros and cons that careered round my skull whilst I struggled over which box to drop my cross into, there are still possibilities for good things to come of all this mess and uncertainty.

It could all still go horribly, horribly wrong. Then again, one has to hold out for the (admittedly slim) possibility of the respective political leaders of this country realising that for once, none of them actually has a total mandate to do whatever they like. It's about time that the political class acted in a manner that represented the plurality of voices that this country speaks in. That can surely be best approached if the duopolic strangehold that Britain has been held in for much of the last century is shaken off and a new way of working cooperatively is embraced.

Easier said than done, but when the old ways have broken down it's generally either new ways or further breakdown.

***
I'd have loved to have spent far more time in this space adding my own commentary on the peculiarities of the past month, but the workload has been pretty insane recently. I'm now teaching both English and IT, which has required getting to know two new courses at the same time, picking up new Excel skills in order to be able to teach one of them, plus the headlong rush towards the end of my DELTA course - a final observed lesson, watched by an assessor from Cambridge, and the build up to the exam in June.

Would equally love to get my teeth into the Brighton Festival a little more too, but circumstances are as they are. Still, got tickets booked for a Tony Allen/Afrobeat night and a live recreation of both 'Sgt Pepper' and 'Pet Sounds' to check out before the festival slips away entirely.

Readers, the intention to give you more and more often is there. I just ask for your patience in return!

Posted by Globalism at 10:43 pm No comments: