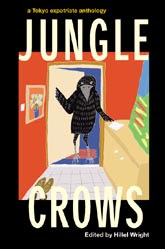 Shelf Life will be giving our debut Central Tokyo performance on Sunday October 7th. It will be our first show outside of Kokubunji's Rubber Soul bar, the venue where we formed in 2004 and grew to be what we are now.
The event is a launch party for a new Printed Matter Press title, 'Jungle Crows', an anthology of Tokyo-based expat writers. The collection featured well-known writers such as the esteemed Donald Richie, contributing editor Hillel Wright and Kyoto Journal fiction editor Leza Lowitz. Selected authors will be giving readings at the event. Tarantula (featuring Tara Solheim) will also perform live.

It also includes a little something from me. I contributed the piece 'My Life And Bushido Ghosts', which to my great surprise has ended up as the preface to the collection! It's my first appearance in a book, so I'm very excited about it. Should also end up being a pretty weird night in some ways too, as I'll be an author at the event and the singer in the band. Back in 2000, I performed in two bands on the same night (support and headline acts), but this will be another story altogether as I'll have two distinctly different hats on.

The 'Jungle Crows' launch party will be held at What The Dickens! British pub in Ebisu. Doors open at 16:00, with readings set to begin at about 16:45. Live music begins from around 20:00.

Shelf Life will be performing a set of original material from our forthcoming mini-LP 'Best Before End', due out in December. The following day, we have a video shoot with a well-know J-Pop music video director. I'll be recording the vocal tracks for the album a week later and then the following week I'm off to Argentina for a wedding.

It's shaping up to be a most unusual month!

Posted by Globalism at 3:29 pm No comments:

I've often heard of this but not yet seen it. Tonight, I watched in full and it really is a remarkable piece of socio-political comedy. It fully explains why the latest Iraq War happened and how the human race is essentially fucked unless we have a massive, massive effort to sort out the pending energy crisis - now...

...and manages to laugh about it all at the same time!

The full length feature is available from Google Video here. Otherwise, it's available in five parts on YouTube and can be seen below.

Posted by Globalism at 5:58 pm No comments:

Trailer for 'The Listening Project'

Keen-eyed readers will remember that back in October of last year, I spent a little time with an American documentary film crew, showing them around parts of Tokyo and hooking them up with some interviewees. The film was to canvas global opinion of the US. I wrote about it here.

I've wondered when I'd hear what happened with the film. As one does, I stumbled back across their website today and found that they've gotten much further than when I last looked back. I'm not sure whether they've managed to secure any distribution for the documentary yet, but they do have a trailer for it available (as seen above).

As they say on the website, they're still listening. If you have something that you want to say about the US, good or bad, you can find a place for your opinions here.

Good luck with getting distribution, guys!

Posted by Globalism at 2:51 pm No comments: