Ambassadeurs - HIPHOPsoulAFROBEATdubstepD&BreggaeBREAKSmix by Ambassadeurs
I stumbled across SoundCloud ages ago and stored it away as 'one of those things to get back to'. It seemed like a great way for sharing music, with an attractive interface and a winning combination of hosting space, embeddable code for players in webpages, and easy sharing of tracks. This made it a real step up from the obligatory MySpace page that all musicians on the Web must have (I've got two profiles there, and spend very little time on them these days) - a service that was already suffering from bloat well before Murdoch got his mitts on it.

Being one of those things stored away, I didn't quite get round to investigating SoundCloud any further until a couple of days ago an email from a Brighton artist dropped into my inbox inviting me to check out some of his tracks. Not an invitation I tend to take up that much these days, but I was glad to follow the trail this time around.

Without wanting to bang on about code and tech too much in this post, I invite visitors to check out the fine mix posted above. It's a full-flavoured blend of Afrobeat, hip-hop, drum 'n' bass, soul, dub and much more, and although the lad posting as Ambassadeurs has got a knack for putting great sounds together, he also seems to have a real talent for his own stuff too.

Check it out and drop him a comment if you like what you hear. Seems I've got myself yet another profile to set up and start socialising my tunes more!

Posted by Globalism at 10:30 pm No comments: 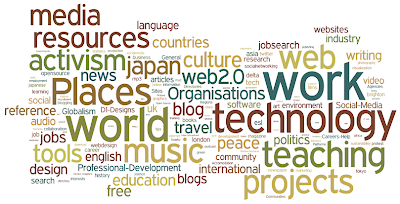 It's taken something like a year to get this one done, but I've finally finished sorting out my browser bookmarks and organised them for sharing through my Delicious profile. This means that the odd moments of free time I can manage to grab can now be used for getting on with other projects that have been piling up in the in-tray. The Wordle image above, made from these bookmarks, seems a pretty accurate reflection of my online interests and activities - travel, tech, peace, music, activism, culture...and work.

I'll be using it to post selections of my favoured corners of the Web from time to time too, as Delicious has a very good means of organising one's bookmarks into embeddable code for posting somewhere else.

It's a great feeling to get something done that's been looming over my time like a tall, dark shadow for such an age. Hopefully, that means that I'll be able to start being a bit more sociable online a little more too.

Posted by Globalism at 12:45 am No comments:

Sorting out my bookmarks, an activity which has taken me close to nine months to complete having had too many other things to do, had thrown up a few treats on the web that I'd previously stumbled across, saved and forgotten about. The sort will eventually manifest itself in a revamped Delicious profile, so that I can easily find the stuff I use on the web wherever I am and without having to be logged in to anything.

One such hidden gem that I'm delighted to have rediscovered is the Free Music Archive (FMA). The service describes itself as 'an interactive library of high-quality, legal audio downloads' and it certainly is that. There is a dearth of sites that offer free music downloads and they are of varying quality (both the sites and the music that they offer), but the FMA seems to be a cut above the rest. It has a good clean layout, is very easy to use and navigate, and has very straightforward features like one-click downloading and code available for embedding players (of tracks or whole albums) in web pages. So far, the quality of music on the site seems pretty good too. All the tracks are made available through Creative Commons licenses, which makes download and discovery dead easy.

Browsing through the site, I came across the collection of songs available in the player above. Essentially a series of remixes of a Youssou N'Dour track - 'Wake Up - It's Africa Calling' - and released to mark the 30th anniversary of the charity Intrahealth, the tracks together comprise a pretty divine set of tunes. N'Dour's refrains, both in English and French, echo through the mixes and after a while become one of those earworms that you can't get out of your head. There are also several guest appearances, including the likes of Nas and Neneh Cherry, who keeps up her partnership with the Senegalese superstar as a kind of post-hip-hop Ella and Louis. The music has gentle Afro rhythms, mellow electronica and more soulful stronger undertones too.

Looks like the FMA is going to be one to revisit. I'll post up some of the tastier morsels I come across here too. In the meantime, enjoy the following formula: Africa + music + open source.

Posted by Globalism at 11:23 pm No comments:

'Coalition of the Willing': a post-Copenhagen call to action

Coalition Of The Willing from coalitionfilm on Vimeo.

Global discourse on the climate change issue reached a peak at the end of last year with the meeting of world leaders in Copenhagen. It was rather adventurously sold in much of the media (British at least) as 'a last chance to save the world from ourselves'.
Of course, in the end nothing of any substance was agreed - it would have required a concerted, multilateral effort for the leaders of the most polluting countries to go against their seemingly natural instincts and change course from policies of continuous economic growth to one of systemic and philosophical overhaul. Also, the leak of emails from climate scientists at the University of East Anglia - rightly or wrongly - changed the conversation away from what was happening to the planet to whether the canaries in the coalmine could be trusted in what they were saying.

Since then and against the backdrop of the frailty of global economic recovery, the issue of climate change seems to have largely taken a back seat on the international stage.

In light of this development in the 'end of the world' narrative that has largely defined our times, I was intrigued to recently come across the above video. Titled 'Coalition Of The Willing', the film boldly aims to re-seize the initiative lost following Copenhagen and inspire people to bypass governments by taking matters into their own hands. Produced by Knife Party, this collaborative venture is a pretty remarkable piece of animation in its own right, irrespective of the message. The wide range of styles nevertheless hang together well as a cohesive whole.

The message of the film is simple yet complex - by harnessing the power of the internet, peoples of the world should sidestep their leaders and come together to solve the problems of adapting to climate change or changing consumptive lifestyles towards more sustainable ends. It takes a largely uncritical view of the Western social revolutions of the 1960s, recommending them as a blueprint for the future whilst wrapping them up in the buzzwords of our digital age - open source, swarming, Linux, etc. Timothy Leary's maxim of the psychedelic era ('turn on, tune in, and drop out') is updated for our times with an invocation to 'log on, converge and swarm'.

'Coalition of the Willing' proposes the setting up of a network of three websites as a step forward towards these goals. Although it might have been even more effective had the film been a vehicle to announce the launch of said sites, the appeal that it contains is bound to encourage some steps in that direction - after all, the internet often seems like a place big enough for a good idea eventually to germinate somewhere or somehow.

In case a reminder is needed of why a change of course is badly needed (and thus prompters like the above film can only be a good thing), the pictures below give a slight flavour of what the human addiction to fossil fuels has done to the Gulf of Mexico. 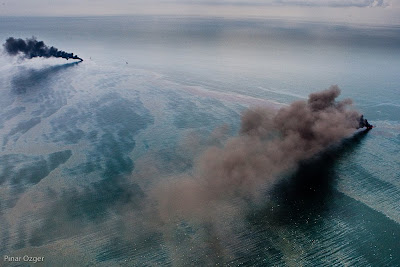 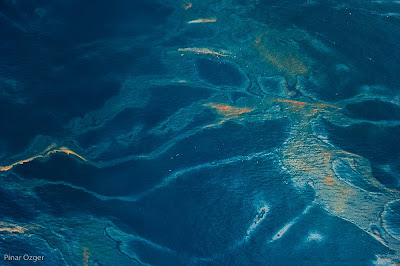 'Oil Slick by the "Source" on the surface of Gulf of Mexico', by PinarOzger 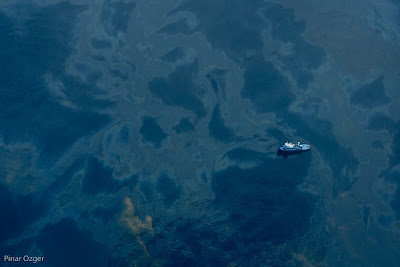 'Beautiful?', by PinarOzger
All photos issued under a Creative Commons BY-NC-SA 2.0 license

Posted by Globalism at 7:45 pm No comments: