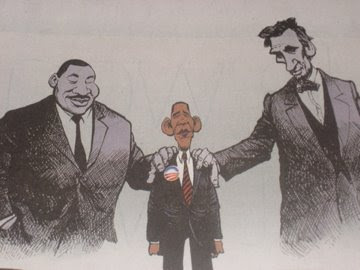 Now that the dust has settled a little on last week's incredible news from the US of the election of Barack Obama, I'll add my contribution while it's still fresh enough in people's minds.

The cartoon above, taken I think from The Washington Post, seemed to capture the historic nature of the moment - a convergence of the paths of Presidents past with the movement towards justice and equality for African-Americans. It's a shame though that both of the hands on his shoulders belong to leaders who were assassinated.

The outpouring of joy, relief and goodwill towards America was quite a moment to be part of, almost a Berlin Wall for the 21st Century. There now appears the very distinct possibility that the US will make a more constructive contribution towards the international community rather than the destructive one it has shown for the past eight years.

This is coupled with the potential for action on some of the very real and deep problems that the world is facing, such as the ending of the ongoing war in Iraq (which is strictly speaking an occupation rather than a war, and it remains to be seen to what extent Obama will pull out all troops) and the threats posed by climate change.

Of course, as with Enoch Powell's famous edict, Obama will fail in the end, as all leaders do. He may manage to implement programmes of economic revival, take decisive action on limiting carbon emissions from the biggest polluter and thus set a good example for other nations, and at least make it look like Iraq can finally turn a page from decades of horror stories, even make some sort of meaningful contribution towards a semblance of peace between the peoples of Israel and Palestine.

My prediction here is that Afghanistan will be his undoing. He appears determined to ramp up operations there and encourage others to do the same. The British failed there three times. The Soviet Union's occupation was their undoing. History tells us that Afghanistan is a country that will not be subjugated by foreign force.

Without wishing to rain on the parade though, it will make a remarkable difference to have a new American President with his ample intelligence, his cultural background and such a mandate for progressive change.

I confess that, like many others around the globe, I've been hooked up to news from the election all year. Now that it's over and I can unhook myself, it's like opening the curtains and having the bright sunshine of a new day streaming in through the window. 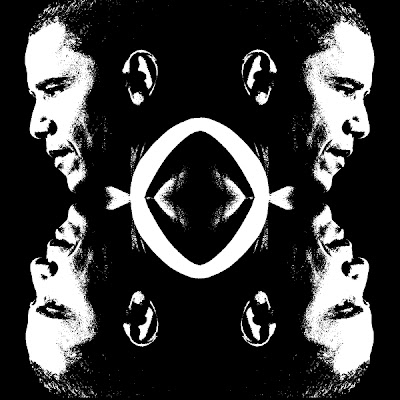 The ending of the race and Obama's victory inspired me to put together a new Control K song, marking the passing of the election cycle. Titled 'Change', the track is an overview of the key moments of the election and culminating in his victory address at Chicago's Grant Park. It's the fastest time I've managed in getting a tune together and putting it up on the Net, five days compared to the nine months that the last Control K track took me.

I also have a video in mind for it and have started a rough draft of it, but that's going to take a little longer to sort out as I do have a few other more pressing things going on in my life too. Hopefully, I'll be able to knock it together fairly swiftly though.

Check the song out at the Control K page or download it from here. Any comments or feedback are welcomed, even if you think that Obama's no better than any of the rest of the crooks that purport to be 'leaders'. Feel free to pass the song around too, if you like it.
Posted by Globalism at 11:46 pm