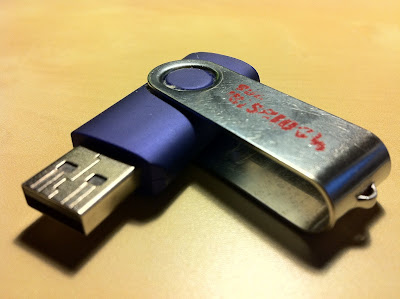 This little baby died on me this week. Particularly foolishly for an IT Teacher, I'd been carrying around most of my day-to-day critical data around on it without a full backup of the most recent stuff on it. Last Sunday, I was working late as usual and all drives briefly disappeared from view on my desktop. When they returned, the USB device I was using seemed wiped of everything that was on it.

I tried what I could to get it back, jumping immediately to Google to look for help, then whoever was on Facebook at the time that might have a clue (via my wife who was urging me not to panic). Eventually, I got hold of an evaluation version of a piece of software that enabled me to dig deep down into the recesses of the disk and find that files did actually still exist - some of the folder structure was even there - but I needed to pay for the privilege of extracting them.

What price information? My faith in the possibility of there being a freeware version out there somewhere took over and I carried on the search. An indictment of our times maybe - whatever the value of the digital goods to me, why pay for something when it can be downloaded for free?

The options that I did come up with didn't seem that much more appealing and my data was still at risk, so I dragged through the week bizarrely traumatised by the event yet still attempting to avoid paying for a download (admittedly I was suspicious of the reviews I saw of the one that allowed me my first deep look inside).

In the end, I made my way to the IT helpdesk at work and tried my luck. Fortunately, there was a piece of software languishing within a laptop hard drive and it managed to flush out almost 1,800 files. The folder structure was wrecked and I'd lost all the file names in the data that was recovered, but at least I had a load of it back. The software was called Recuva and it turns out that it's freely available on the Net anyway. So that's my tip for recovering from the trauma of data loss.
A big thanks to all who helped try and get me my digital admin back and to the people giving that software away. I ended up turning my data loss into a lesson for all of my students. Whether they follow the advice to regularly back up or not I don't know, but I certainly will be!

Terrible news, though pleased to hear you managed to salvage some of the data at least. If you're not using Dropbox you should seriously consider it - once installed it creates a folder in your Documents which automatically syncs whenever something is dragged into it or saved (& it's also available for iPhone for what it's worth). From another computer you just log in to your account & download the file (though if you alter it you'll have to re-upload it manually). You get 2GB free initially but you can bump it up by referring others - so here's my referral code! ;) http://db.tt/h1YLboz

Although I managed to save some of the data, the stuff I recovered that was downloaded is going to be easier to redownload as I'd need to go through everything and rename it anyway. Still, useful to jog my memory with what was on the stick in the first place!

Stupidly, I already have Dropbox installed on my home computer (plus the iPhone app), but haven't actually used it properly yet. I even taught all my students about it. Really must get going on using it now - no more excuses.