Control K on Best Of MySpace - wanna remix it? 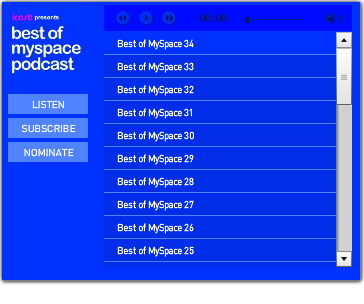 I'm somewhat thrilled to announce that one of my tracks - 'Eloise Twisk' from the Control K album 'The Front Line (Redux)' - has just been featured in the latest episode of the 'Best Of MySpace' podcast by Gill Mills.

Apparently, Control K was nominated by a listener of the show - whoever you are out there, thank you very much!

As a younger musician, I always really wanted to get a track played on the John Peel show. This must the modern equivalent. While the music doesn't seem to be quite as diverse as his line-ups, it is nevertheless a fine selection of up-and-coming artists.

Well handled electronica from Japan, which, given the right remix, wouldn’t sound out of place on a global phone ad. As it stands you can quite happily drift off to this and imagine the summer you’d like to be having. Under water.

So here's a thought. If anyone out there is interested in remixing the track, perhaps we could nail some sort of licensing deal out of it. I'd be very interested to see what someone else would make of the track too, so here's a good chance to explore the collaborative power of the Web.

For other visitors, do please have a listen. My track appears in podcast # 35 and can be found close to the end of the file. Clicking on the image at the top of this post will take you directly through to the Best Of MySpace page, where you can hear it and many other fine tunes. I've also added a widget to this blog too - scroll down to below the News section and listen directly from this page.